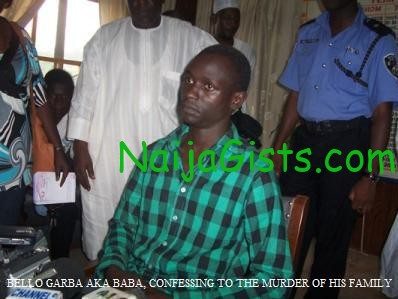 May 16, 2012 – Undergraduate Student To Die By Hanging For Killing Parents, Siblings

A Kano High Court, yesterday, sentenced to death, by hanging, Bello Garba Bello, alias Baba, an undergraduate of Kano State University of Science and Technology for killing his parents and younger ones in 2010. naijagists.com

Bello was on September 13, 2010, arrested by security forces for killing his father, Garba Bello, a Director with SSS, his mum, Habiba Garba, younger sisters, Hafsat and Murjanatu Garba and his younger brother Khalifa, in cold blood at their family house on Zoo Road by Gandun Albasa Quarters in Kano metropolis.

The judge, Justice Haliru Abdullahi, said he was satisfied with the evidence tendered before him that the accused actually committed the five-count charge of homicide for which he was charged.

In his judgment, Justice Abdullahi said: “In the end, I found the accused guilty on the five-count charge and hereby convict him accordingly on each of the five counts.”

Justice Abdullahi, in a 66-page judgment, held that the five victims were killed as a result of various degrees of multiple injuries inflicted on them by the accused person contrary to section 221 of the Penal Code.

Justice Abdullahi stated that “in the light of the foregoing, I found that the prosecution has proved its case beyond reasonable doubt against the accused person on all the five- count charge. I hereby sentence the convict to death on each count and he shall therefore be hanged by the neck until he is dead.”

The prosecution counsel, Shu‘aibu Sule, said the accused had confessed to have committed the offence in a written statement he made to the police on September 15, 2010.

He presented seven witnesses before the court including the younger brother of the accused, Farouk, whose testimonies supported the charges against the defendant.

The defence counsel, Mr. Ahmed Raji, had tendered a 17-page written address before the court explaining the circumstances leading to the death of the five persons and exonerating the accused from the charges preferred against him.

According to him, the statement written by Farouk implicating the accused was inadmissible as the witness was below the age of 14 and that Bello Garba had earlier written a statement on September 14, 2010 exonerating himself before he was forced to write another one on September 15, 2010 confessing to the offence.