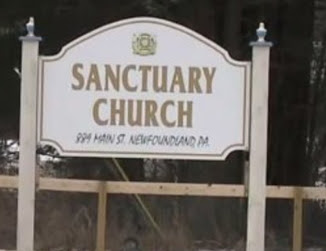 Feb 22, 2018 – US Church Tells Couples To Bring Their Gun To Church For Blessing

World Peace and Unification Sanctuary in Newfoundland, Pennsylvania, U.S. has invited couples to bring their assault rifles in to be blessed.

An AR-15 was the weapon used by Nikolas Cruz when he opened fire at Marjory Stoneman Douglas High School in Parkland north of Miami on Valentine’s Day, killing 17 people.

Tim Elder, the church’s director of world missions, told Newswatch 16 that AR-15 rifles symbolise the “rod of iron” mentioned in the book of Revelation.

“Now more than ever, good people need to stand up and claim for themselves the tools that can be used to stop that kind of evil,” he said.

The ceremony in Wayne County was planned before the mass shooting.

Elder said the church was not planning to reschedule or cancel the event.

Up to 600 people are expected to attend the ceremony next Wednesday.

“This will be a big thing for us. It’s a new stage for us because it incorporates the rod of iron, as it is in Revelations,” Elder added.

“Revelations talks about the returning Christ ruling with the rod of iron.”

Wallenpaupack South Elementary School, which is located near to the church, is deciding what it will do in response to the ceremony.

Meanwhile, leaders of the National Rifle Association (NRA) are accusing supporters of gun control of exploiting the mass school shooting in Florida to promote an anti-gun agenda.

He said opponents of gun rights want to “sweep under the carpet” the failure of school safety, families “and even the unbelievable failure of the FBI” to prevent the shootings.

US President Donald Trump tweeted his backing of the NRA.

Continue Reading
You may also like...
Related Topics:church, couples, guns