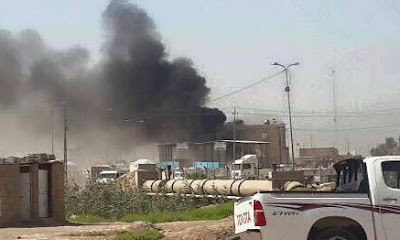 The United States Air force has admitted its planes carried out an attack in eastern Syria that the Russian army says killed at least 62 Syrian troops fighting IS.

The US said its planes halted the attack in Deir al-Zour when informed of the Syrian presence and would not knowingly strike them.

The strikes allowed IS jihadists to advance, the Russians said.
Russia earlier said the current ceasefire in Syria was in danger of collapse and the US would be to blame.

The cessation of hostilities does not include attacks by the US on IS or other jihadist groups.

The US Central Command statement said the coalition believed it was attacking positions of so-called Islamic State and the raids were “halted immediately when coalition officials were informed by Russian officials that it was possible the personnel and vehicles targeted were part of the Syrian military”.

It said the “Combined Air Operations Center had earlier informed Russian counterparts of the upcoming strike”.

“Syria is a complex situation with various military forces and militias in close proximity, but coalition forces would not intentionally strike a known Syrian military unit. The coalition will review this strike and the circumstances surrounding it to see if any lessons can be learned.”

BBC News reports that Russia’s defence ministry earlier said that if the US air strikes did turn out to be an error, it would be because of Washington’s stubborn refusal to co-ordinate military action with Moscow.

Continue Reading
You may also like...
Related Topics:isis, jet, kill, Soldiers, syrian, us