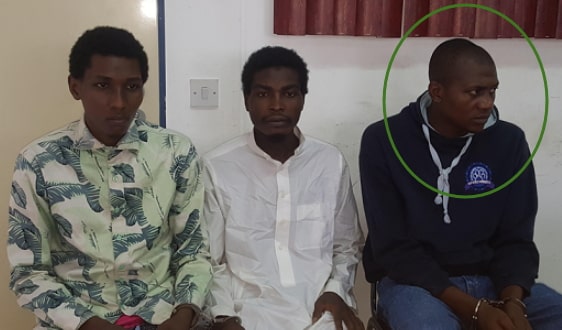 According to CSP Adeniran:

“On the 7th of July, 2017 at about 2200hrs at No. 2, Jimoh Bolanta Street, Kulende Ilorin, Kwara State, the principal suspect and other suspects yet to be arrested armed with Barreta pistol stormed the shop of the Deceased, Mrs. Rasheedat Jimoh, shot her on the left side of her back targeting her heart and killed her in the process in the presence of her daughter and house help, robbed them of cash and other valuables before fleeing the scene.

“The deceased was immediately rushed to the Hospital where she was confirmed dead from the bullet wound sustained from the gunshot.

“Consequently, the IGP directed the Special Tactical Squad and Intelligence Response Team (IRT) to conduct a discreet investigation into the incident and the circumstances surrounding the assassination of the innocent woman to arrest and bring perpetrators to justice.”

On how they were arrested, he said: “The joint IGP-IRT and STS teams relentlessly embarked on intensive investigation, trail and manhunt of the perpetrators which led to the arrest of one Ibrahim Aminu ‘M’, a native of Shagari Village, Shagari Local Government Area of Sokoto State and recovered in his possession a Barreta Pistol with 19 rounds of Live ammunition.

“The suspect, Ibrahim Aminu during interrogation made confessional statement to the Police investigation team, confessed and admitted to have fired the shot that killed Mrs. Rasheedat Jimoh.

On the roles the other suspects played, the police said: “Saadi Abubakar from Funtua Local Government Area of Katsina State during investigation confessed and admitted to be the owner of the Barreta Pistol which he bought at the rate of N60, 000 from Oche Ellah and gave to Ibrahim Aminu for criminal activities.

“Oche Ellah from Otukpo Local Government Area of Benue State confessed and admitted to have sold the Barreta Pistol to Saadi Abubakar for N50,000.00 and not N 60,000 as claimed by Saadi Abubakar.

“He also admitted that he bought the said Barreta Pistol at Yongo village in Benue State through one Ugbede who is still at large.”

The Police said the suspects have made confessional statements and admitted to the roles they played adding that investigation was ongoing to arrest other suspects still at large.

The Police also said they will all be arraigned in court on completion of investigation.

On why the victim was murdered, Aminu who claimed to be a scavenger said: “We did not intend to kill her. Our intention was just to steal from her but when we fired the shot and discovered that it penetrated her body, we fled the scene.

We only wanted to rob her of her belongings to settle debt. We did not know that she was going to die. I know owning a pistol is a criminal offence and I cannot blame my actions on the devil. I can only blame laziness for my actions.”