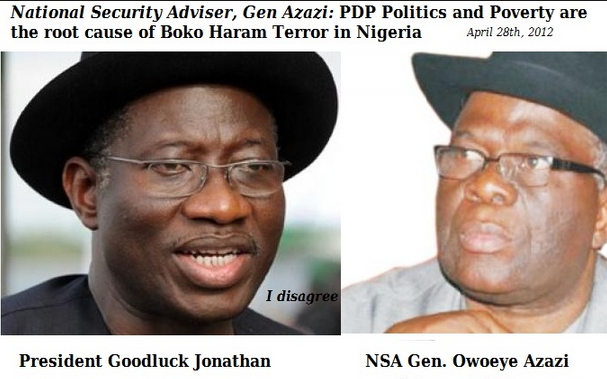 Shortly after daring to give the truth to the Nigerian people, General Azazi was not only fired from his position, but killed when his helicopter was exploded over Bayelsa. And that is why the American officers, who came to help rescue the young school girls abducted by Boko Haram since April 14, 2014, reportedly said they would not share intelligence information with their Nigerian counterparts.

General Andrew Azazi is a martyr and national hero. In these times, when people kill to simply remain in power and at favor, General Azazi dared to differ. Those of us who used to question him in the past, have now forgiven him out of respect for his laying down his life, to squarely point out the root of Nigeria’s problems and courageously open the door for us Nigerians to address this. He will never be forgotten and is death will not be in vain, by God’s mighty grace.

May his soul and that of Yakowa rest in peace.