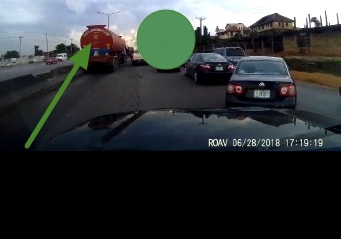 Check out the ill fated Petrol tanker that caused disaster in Lagos yesterday.

The tanker that eventually fell, spilled its content and caught fire around 2:40pm yesterday was seen moment before the incident as it jackknifed and rolled into cars.

Watch the footage below to see what happened shortly before the fire explosion.

It was captured by a driver who escaped the inferno that happened on the dreaded Otedola axis of Lagos Ibadan Expressway yesterday.