On Saturday, sporadic gunshots caused chaos in some voting stations in Akwa Ibom state. The gunshots forced all voters mostly old men and women to return home to safety.

The PDP supporters then had a field day thumb-printing ballot papers, under the supervision of INEC officials.

Security officials were not deployed in the three units. It is unclear if it is deliberate to allow the PDP supporters execute their plans without molestation. 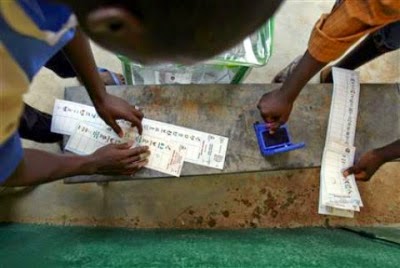 One of the INEC officials who requested anonymity told PREMIUM TIMES that they were all pressured by their boss to assist PDP to win the elections at all cost so they joined others to thumb print ballot boxes.

See the corrupt officials working with hired PDP supporters to thumb print ballot papers in order to perfect election rigging plan for the PDP in the video below:

In Akwa Ibom state, we learnt that people couldn’t vote in APC stronghold areas due to non availability of result sheets at the voting stations.

If you are a fan of any political party and you support election fraud, then check your conscience.