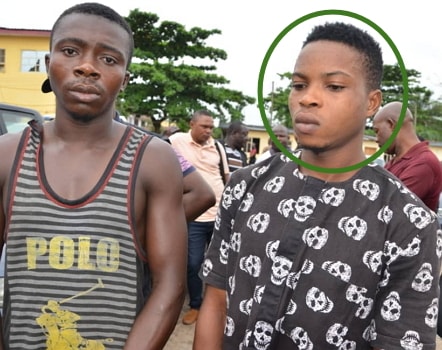 The officials of Lagos State Police command have arrested a waiter in Lagos for allegedly kidnapping his boss’s grand child .

The suspect, Meshack Felix allegedly kidnapped the 3 year old boy on the 4th of June 2018 at Dog Kennel, Railway Compound in Ebute Metta Lagos and took him to his village in Abia state.

According to the state Police Commissioner, Imohimi Edgal, the victim’s mother, Mary Chidi, reported that she suspected Felix abducted and took her grandson to an unknown destination.

“She also stated that two days after the disappearance of the child, the said Meshack Felix sent her a Diamond Bank account number 0081873532 belonging to one Chinecherem Felix and demanded a ransom of N600, 000 or the boy would be killed.

“Following the compliant, I directed the OC Anti-Kidnapping to investigate the matter. The squad went into action immediately and covertly located the suspects at Lokpanta Autonomous Community of Umu-Nneochi LGA of Abia State, where the two suspects were arrested. The police rescued the boy unhurt and he has since been reunited with his family.”

The boy’s father, who was at the command headquarters on Thursday, said “he’s my only child and he stays with his mother at my mother-in-law’s place.

“My mother-in-law owns a restaurant. Sadly, when nobody was paying attention, Felix took my son away. He kidnapped him and took him to Abia State. This is a young man I felt needed help and as an igbo man like me, I decided to help him. I gave him my clothes and shoes to help him look good but look at the way he repaid me.”

Narrating how she employed him, the victim’s grandmother said Felix had come to her pleading to be offered a job and he felt compassion for him.

“I made a mistake by not asking for a guarantor or do any due diligence. I pay him N800 every day but he had ulterior motives against me and my family.”

Confessing to the crime, Felix exonerated his younger brother, saying he planned and executed it alone because he needed money to buy equipment for his welding business.

“My brother Chinecherem does not know anything about the kidnapping. I kidnapped the boy alone and demanded for the ransom so that I can get money to buy equipment for my welding job. I am a welder by profession but there is no money for me to start on my own business.

“I only asked Chinecherem to send his account number so that I’ll send N4,000 for feeding. He did not know what I wanted to do with it.”

Corroborating Felix, Chinecherem said his brother told him the boy was his son when he asked after seeing the kid in the village. [NAN]