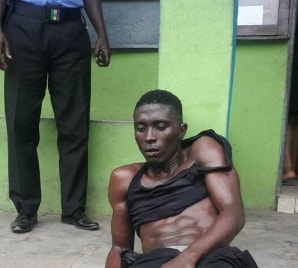 Man, Member Of 3 Secret Cults, Aye, Aberaye and Vikings Arrested For Threatening To Kill Woman Who Rejected His Advances

A 35-year-old tailor Akeem Lawal, yesterday appeared before an Ikeja Magistrates’ Court for allegedly threatening the life of a woman for refusing sex.

Lawal, who lives at 65, Olorunshogo Street, Mushin, is standing trial on a three-count charge of conspiracy, membership of an unlawful society and threat to life.

Prosecuting Inspector Benson Emuerhi said the accused vowed to kill Miss Dooshima Williams if she would not succumb to his sex request.

Lawal, he said, committed the offences at 10p.m. on May 12 at Block 5, Olusegun Olusemo Street, Parkview, Ikoyi, Lagos.

The accused, he said, conspired with others still at large to commit the offences.

“The accused threatened to kill the complainant the way he and his cult members murdered one Farabale in Abuja,” he told the court.

He added that Lawal belonged to three secret cults – Vikings, Aye and Aberaye.

According to the prosecutor, the police have received several reports that the accused is a member of an unlawful society.

Chief Magistrate O. Sule-Amzat granted the accused N20,000 bail, with two sureties in the like sum.