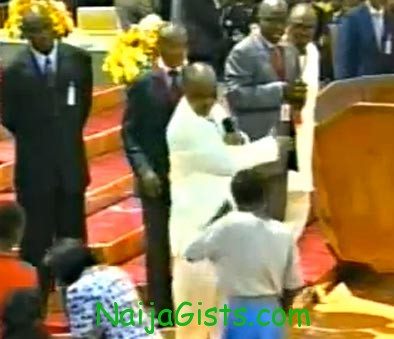 According to a report from News of the people, the General Overseer of The Winners Chapel Int’l, Bishop David Oyedepo is no doubt a man of God that is revered both at home and abroad, as he has excelled in his calling as a preacher of the word  and by extension has touched the lives of many through his ministry, educational institutions and philanthropic gestures.

But with all these glowing virtues, the very opulent and noveau riche  pastor has been in the eye of the storm over a substantiated claim that the man of God at his expansive Cannan Land worship centre, slapped a young lady, one of the many worshippers that attended the yearly Shiloh programme of the winners chapel. The reason for the physical “spiritual” slap on the face of the lady by Bishop Oyedepo has since generated reactions and counter reactions from many quarters. On the heels of the heat generated by the expensive slap,this may have spurred the Omu-Aran, Kwara State-born pastor to react in very strong terms why he had to slap the young lady.

According to the bishop, he slapped the lady, allegedly claiming to be a witch, in order to save her from the claws of the devil. The man of God was so vehement in his reaction that he blasted his critics via a video clip  that has even been posted on the internet showing Pastor oyedepo boasting about his deed of valor in the slapping matter, even in the presence of his congregation.

The mercurial man of God boasted further that the girl had even returned later to beg for forgiveness. Oyedepo went further to re-iterate, boasting about his now controversial deed: ‘I slapped a witch here last year. She came back in February to apologize. She begged me to please forgive her” Oyedepo then went on to give spiritual advice to members of his congregation who may be under similar attack by the forces of evil’’ “Starting today, the things harassing you, you will start harassing them” he blustered.

Invariably and rather spontaneously, Oyedepo’s blunt attitude to the self-evident fact of his ‘misbehavior’ has been attributed by many of his critics to overweening spiritual pride and arrogance. His critics say his behavior may be attributed to the fact that he is probably looking upon himself as a “man of God” with spiritual right to assault anyone he declares a witch.

For example, a group called “Stop the Violence Against Women in Nigeria” has purportedly written a petition calling on the Ogun State Government and the state ministry of justice through the attorney general to commence formal investigation into Oyedepo’s assault of the poor girl. As if this step was not enough, they went further in very unambiguous terms to condemn Oyedepo ”bestial attack on the lady via slapping.

With the outrage and confirmation by the bald-headed pastor, many opposing comments have been flying about, as to the efficacy and genuineness of such an assault on a young gullible lady, all in the name of deliverance or what ever they call it in Christendom. One of the comments, as reported through an online publication reads “the flamboyant Nigerian mega pastor, David Oyedepo…..caused international outrage after a video posted on youtube showed him assaulting a teenage girl during a Shiloh service at the headquarters of his church in Otta, Ogun State, Southwest Nigeria……, it went further, “It appears as though the Bishop may have violated the Criminal Code Act of (Chapter 29 of part V; sections 351 to 365of the Nigerian constitution.

The group, based in the US is not even stopping there, they are at the moment pulling all their acts together to try and get at least 101,000 signatures that they will submit to Gov. Amosun of Ogun State, insisting that they are tired of this kind of Conduct and extreme violence against women.

The critics did not stop there; yet on another blog, a concerned free thinker posted thus “In spite of Oyedepo’s best efforts to label the poor girl a witch, the young girl insisted that she was not the kind of witch Oyedepo was insinuating and that she was a witch for Jesus”

This may have been the statement that irked Oyedepo, thus spurring him to unleash a dirty slap on the gal, as a way of reproaching her. ‘ Of course it may be argued that Jesus does not have a group of followers that are called witches, but this was a girl that had been browbeaten and spat upon by a man who calls himself a bishop, a man who was mentally torturing a wretched religious captive into abasing herself enough to accept being described as a witch. The girl must have been desperately inventive, after a fashion, to come up with the ‘Witch for Jesus’ fallacy of definition, which I do not think is better or worse than the description of nuns as BRIDES OF CHRIST.

Critics such  as  this maintain that Oyedepo deliberately took the girl’s expression “witch for Jesus” out of its context. The girl apparently was creatively trying to tell the “man of God” that she is not a witch but a dedicated follower of Christ. Had the pastor acted in good faith, rather than trying to make public show of a helpless girl, he would simply have corrected her unintentional “misuse” of language (“misuse” as it would appear from the Bishop’s perspective). But in pandering to his personal pride and vainglory, he preferred to deal her a resounding slap on the face for “blasphemy.”

Reactions to Oyedepo’s action on several popular Nigerian websites have since then been mixed. While many have flagrantly condemned Oyedepo’s behavior, others, unduly impressed by his claims to special “spiritual anointment” either seek to exonerate him or caution critics. A critic of Oyedepo comments:

“Oyedepo would be in jail by now serving his time if he tries this in any western world, sadly in Nigeria anything goes…for you Oyedepo supporters, shut up, you’re nothing but worshipers of man (sic).”

But a supporter of Oyedepo on yet another website reflects what the earlier critic calls “anything goes” attitude of followers captivated by Oyedepo’s charisma. The commenter cautions Oyedepo’s critics:

From the foregoing, it’s very obvious that the man of God, Bishop David Oyedepo, has gotten more than he bargained for as the matter is causing an increasing uproar in the polity, especially in the media. In conclusion, one is at a loss trying to figure out why he thinks he is fit to condemn anyone to hell, but if we take this matter back to the Bible, even Jesus did not show any act of violence. One therefore does not need the Bible to show how wrong Bishop Oyedepo was because as a human being, just like everyone else, not even Oyedepo should show an act of violence in the name of Jesus. Bishop Oyedepo needs a better explanation for his unwholesome act.