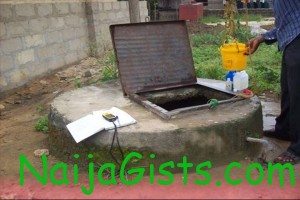 Edo state police command are presently investigating the circumstances surrounding an attempt to drown an eight-year old girl in a well by her stepfather simply identified as Monday. naijagists.com

The eight year-old pupil of Ukhegie Primary School, Owina in Benin City, who was dressed in her school uniform on Monday was allegedly lured by her stepfather in the pretext that he was taking her to school, but took the girl to far away Oko community where he dumped her in a well.

Festus Aimebinomo, a passer-by, however, heard the voice of the drowning girl crying for help, and quickly jumped into the well and lifted the girl out.

According to PM report, while narrating how he rescued the drowning girl, he said: “I was passing by when I suddenly heard the voice of the girl shouting, ‘I dey die oh.’ Immediately I just made a U-turn and came back, I saw this young girl, an lifted her up and laid her on the ground. Water was gushing out from her eye, nose, mouth and everywhere,” Aimebinomo said.

He said the little girl’s school bag had helped to support the girl like a life jacket which he said prevented her from drowning before his arrival.

The girl’s mother, Christiana Monday said she was at loss over the dastardly act when she was informed.

When contacted on phone, Edo State police image maker, Etim Bassey could not be reached as his mobile line was not available.

Edo State Commissioner of Women Affairs and Social Development, Dr (Mrs.) Inumidun Idehen, who confirmed the incident, said Mr. Monday has been handed over to the police for prosecution.

This step-dad is one wicked bastard.