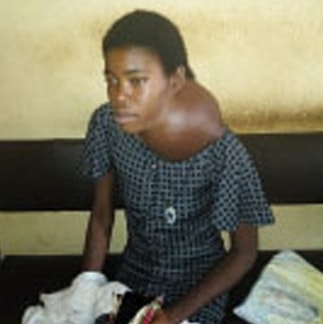 Mrs Janet Erdoo Tyavyar has three children from her marriage of seven years, but today, stricken by a neck disease, she feels abandoned by the one who should be her closest companion. She needs a lot of help. It is said that her husband has left her to her fate.

Twenty-four-year-old Mrs Janet Erdoo Tyavyar who hails from Gboko, in Benue State, has been suffering from Neurofibroma of the neck for the past six years.

She has nobody to lean on for help and requires as much as N6 million to be cured of her affliction.

She told The Nation that the little money she raised from some public-spirited individuals in the state had been spent on running some tests in different hospitals in the land.

Her elder brother, Emmanuel Erdoo, told The Nation that her sickness started like a joke by causing her to always scratch her neck.

“When we discovered the swollen portion,” he said, “we took her to Teaching Hospital in Makurdi where she was referred to the National Hospital Abuja in January, 2017.

“Some tests were run on her at Union Diagnostic and Clinical Services Plc, where she was referred to India for surgery”

Erdoo said the sickness does not allow her to eat or breathe well and keeps her uncomfortable at all times.

He said he and the family had done all they could do without any remedy, adding, it is the reason for soliciting for help from good spirited individuals in the country, in other not to lose victim.

In a letter the family made available to The Nation in Awka, Anambra State, they are appealing to Governors Willie Obiano of Anambra State and Dr Samuel Ortom of Benue State to come to their aid.