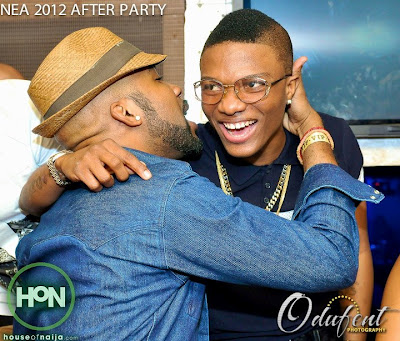 Though he didn’t specify the reason for his decision, sources in the know claim the singer left over money issue.

According to Gist Village, “Wizkid is the backbone of EME music label. The boy (Wizkid) feels that Banky W has been milking too much from him with the large chunk of what Banky W takes from what the boy makes.

A typical example of EME’s costs & income for Wizkid

Its commendable the amount of talent Wizkid has but without the investment of EME in the early days, the influence of the label owners & the business acumen of the label, Wizkid could still have ended up successful, but nowhere near how successful he is now.

EME TAKES 50 PERCENT OF EVERYTIN WIZKID GETS, OSAGIE USED TO TAKE 25 PERCENT AND WIZKID 25. BUT WIZ SAW HOW DAVIDO WAS POPPING INDEPENDENTLY AND MAKING MONIES, SO HE TOOK MATTERS IN HIS OWN HANDS, TOOK OSAGIE OUT, GOT GODWIN TOM, GIVES HIM 10 PERCENT, HE IS TRYING TO REDUCE EME’S 50 PERCENT BUT THEY ARE ACTING UP COS THEY SHOOT HIS VID AND ALL, AND ALL EXPENSES ARE ON THEM. WIZ IS NOT HAPPY. THEY ARE OWING HIM MONIES, FROM THE PEPSI DEAL AND OTHER DEALS. WIZ HAS TAKEN MATTERS INTO HIS OWN HANDS, HE IS PLANNING TO RELEASE AN ALBUM THIS YEAR, BUT THE EME CALENDER IS DISRUPTING HIM COUPLED WITH THE FACT THAT EME DOES NOT WANT TO BULGE ON THE PERCENTAGE AND THE MONIES THEY OWE HIM. THIS IS BUSINESS. WIZ MIGHT LEAVE, BANKY IS GETTING PEOPLE TO TALK TO HIM. BANKY IS NOT THE OWNER OF EME, JUST A DIRECTOR, THERE ARE OTHER PPLE INCLUDING SEGUN AND CO

“Wizkid has asked for an improved contract because the present one allocates much of Wizkid’s earnings to Banky W. You know when you are coming up, you sign any kind of deal because you just want to climb stardom.

“That is the situation the boy finds himself but Banky felt hurt that Wizkid could ask for an improved offer after what he (Banky W) has done for him.

“This was the beginning of the problem between them. The boy even threatened to leave the label sometimes ago but Banky W felt it was a joke. He took it with a pinch of salt. Now, he is at a crossroad and confused on what to do,” a source said

Wizkid’s mum waded into the matter but Wizkid reportedly ignored his mum advice and stood his ground on leaving the label. “Wizkid’s mum has also tried to talk sense to her son but it seems the guy (Wizkid) is bent on moving on with his life.”