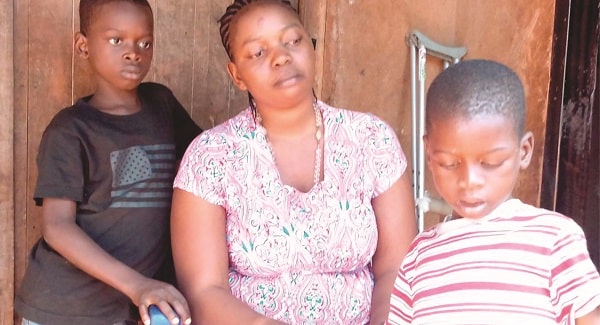 DAMIAN DURUIHEOMA examines the pitiable and agonising plight of a 26-year-old mother of two and her thorny path to a normal life, having been abandoned by her husband and is now in need of N6 million to undergo hip replacement after a car accident.

NENNA Ogbonna Chimekwa was full of life and hoped for a brighter future when she met her husband, Wordu Chima Chimekwa, a native of Umuodogwu in Emeohua Local Government Area of Rivers State a few years ago. It would seem, however, that things have turned upside down as she now lies helpless in her mother’s room, where she has to be aided to perform the simplest of tasks, including going to the toilet, having a bath or even shifting from one end of her bed to another.

Although she uses a set of crutches to support herself, to be taken to the hospital, her mother will have to use her hands to move the young woman’s legs. She is such a pathetic sight that no human being would see without being moved to pity. Her mother, Georgianna Ogbonna, a widow and part time teacher at Queen of the Holy Rosary College, Nsukka, is faced with a choice between giving up on Nnenna and seeing how much more she can do to restore her back to life. 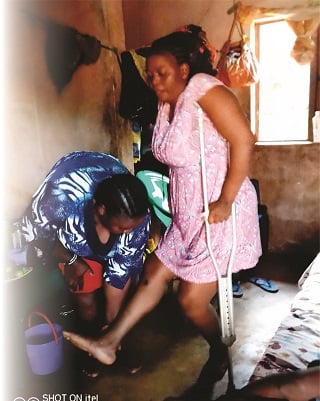 Nnenna had been involved in a serious accident that claimed the lives of every other person in the vehicle on her way from Umuodogwu to Warri, where she used to buy the crayfish she sold in her village. The accident had affected her hip so badly that doctors at the National Orthopedic Hospital Enugu (NOHE) said it had to be replaced at the cost of between N5 million and N6 million.

The 26-year-old, who has been living with the pains and agony of the fracture since February, 2021, was discharged from the hospital to go and look for the money before treatment could commence.

It was learnt that she had contemplated taking her own life just to bring her suffering to an end once and for all, but her mother, a major source of her living, has continued to encourage her to be hopeful that help would come.

She told The Nation:

“It was on 5th of February, 2021 when I was going to the market in Warri, Delta State, where I normally bought crayfish. I was travelling in Sienna bus and we had an accident at Ugheli. I was rushed to a hospital where I was told that all the other people in the vehicle had died.

“I was rushed to Ufoh hospital in Ugheli and the hospital referred me to the orthopedic hospital, but I could not go there because I had no money at all. The money with which I was going to the market was stolen at the scene of the accident.

“The people around decided to take me to a traditional bonesetter, and after spending one month there, I was discharged and given a set of crutches to walk with.

“I told them that I was having sharp pains and difficulty moving my legs, but the woman assured me that I would be fine after some time. Then, I was able to move a little bit in crutches with little assistance.

“When I got home, my mother, who came to pick me up, could not believe the sight of me. She said my hip bone was sticking out and that we should go to the hospital immediately. That was how we went to a private hospital where after another X-ray the doctors noticed that the bone was not in a good position.

“They said my hip bone had started gumming with my flesh and advised that something urgent be done to replace it.

“They said that if something is not done urgently, it may lead to a dangerous cancer that will need much more money to remove my leg entirely.

“After the surgery, the doctor asked us to go for CT scan and they discovered that my bone socket joint had been damaged and could not be repaired.

“They said they had tried to put the bone that was removed back into my bone socket joint but couldn’t because the place was damaged, so they referred me to another doctor that specialised on hip at the same hospital.

“After examining the CT scan, the doctor said that my hip joint was totally damaged. They said that if I go just for hip replacement, it might not work because my muscles were already weak.

“They advised me to look for between N5 million and N6 million so that if they put the hip replacement and it does not work, they will now do the second surgery for total hip replacement and that was the only option for me to walk again, if not I would remain bedridden and in constant pains like this.

“So, when no money was forthcoming from anywhere, the hospital asked that I should be discharged so that I could go home. Even the bill for the one we stayed in the hospital was paid by some people because we don’t have any money.”

My journey into marriage

Nnenna, an Nsukka indigene of Umujioha Ovoko community, Igbo-Eze South Local Government Area of Enugu State, had met her estranged husband in 2012 after she had written her senior school certificate exam. The man identified as Chimekwa, a final year student of the Department of Mechanical Engineering in the University of Nigeria Nsukka, had promised to train Nnenna in the university if she agreed to marry him.

Nnenna, desperate to gain admission into the university, having made all her papers in WAEC, agreed to that request.

She said: “My reason for agreeing to his proposal was the difficulty my mother passed through in order to source money for me to register for WAEC. In fact, nobody in this whole village agreed to help me out.

ADVERTISEMENT
“Even after I agreed, Chimekwa made me to swear an oath never to leave him because, according to him, he had lost a lot in the past having trained many girls to the university with none of them agreeing to marry him after graduation. I told him I would have no problem marrying him provided I went to the university.

“Few months after he graduated, he invited me over to Port Harcourt where I was supposed to register for and write JAMB. Few months after my stay with him, I became pregnant for him.

“When it was time to register for JAMB, I reminded him but he said since I was pregnant, it would be too stressful for me to go to the university with pregnancy and that I could go to school even after giving birth to three children.

“I told him I would cope but he refused. At that point, I could not inform my mother that I was pregnant because he had not met with my family members to indicate interest.

“When I told his mother about my worries, she told me that their tradition does not permit marriage with a pregnant woman and that I should wait until I put to bed and they would come formally to my people.

“He actually came to my village after child birth with two of his friends and with drinks to let my people know that he wanted to marry me.

“In 2016, I gave birth to my second son and my husband changed totally. He started beating me and treating me like a slave. He finally left me in his village after the death of his mother and I was no longer hearing from him. I also didn’t know where he was living.

“If I called him, he would not pick my call and did not care about me or our children. Feeding became a big problem for me and my children and suddenly, my second child developed ill health that led to him convulsing almost every night.

“When I told him about it, he simply said it was something that should be treated traditionally.

“After enduring the disappointment and hardship, I decided to return home to my village where my mother would take care of my children while I looked for a business that would sustain us and, most importantly, take my son to the University of Nigeria Teaching Hospital, where a medical doctor recommended that I should take him for proper treatment of his ailment.

“Already, my son has been disfigured and cannot even talk at five years. Here in the village, most of his peers laugh at him and call him imbecile. That breaks my heart a lot because he wasn’t born like that.

“With the help of my mother, I was able to raise money to start crayfish business. I was actually managing to take care of my children and paying their school fees.

“I was hoping to raise up to between N100,000 and N200,000 to take my second son to the hospital. It was during one of the trips to Warri, Delta State that the accident occurred.

“Since the accident happened, they have had to stop school because I can’t do anything without assistance. They are the ones helping me to do certain things except bathing and going to toilet, which my mother helps me to do”.

Nnenna said all her efforts to reach out to her husband for the upkeep of her children had remained futile.

“My little son has called him on phone to beg for a visit but he told my son that his new wife would not like him to visit us. That was the last time he spoke with us.”

Nnenna appealed to good spirited and well-meaning Nigerians to help her to walk again by paying the N6 million for her hip replacement.

The medical director of the National Orthopedic Hospital Enugu was not available for comments when The Nation visited the hospital. But the head of the department of Medical Social Works, Ebede Ngozi, confirmed the incident, describing Nnenna’s case as pathetic.

She said total hip replacement costs a lot of money and not an expenditure the hospital could afford for free at the moment.