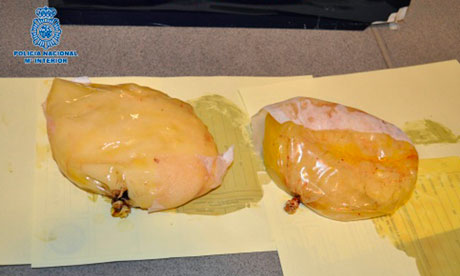 A Panamanian woman has been arrested in Spain with fake breast implants that turned out to be plastic bags containing 1.4kg of cocaine.

When the 20-year-old was stopped for a search at Barcelona’s Prat international airport, police noticed that she had gauze under her breasts.

She said she had had plastic surgery two months before, but the wounds were open and she was still bleeding.

She was taken to hospital, where the cocaine bags were removed.

Spanish police say thousands of people try to take illegal drugs into the country every year, but this is the first time they have come across fake breast implants containing cocaine.

Flights coming from South America, where most of the world’s cocaine is produced, are subject to thorough checks.

The young Panamanian woman had flown in from Colombia and initially denied having any illegal drugs on her, police said.

But on closer examination, they were able to see a “white object” through her wounds.