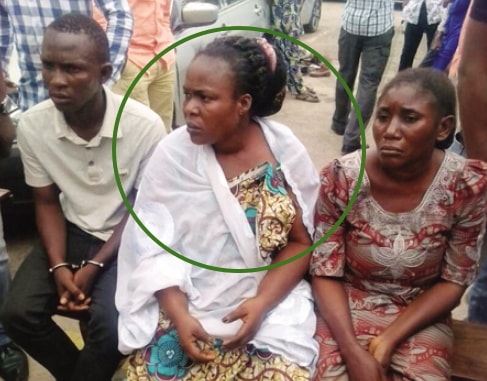 A business woman has been arrested for allegedly plotting her own kidnap and that of her sick daughter, 18-year-old Hamidat Kabir in order to defraud her husband.

45-year-old Hadijat Kabir allegedly  hired three men to plot the fake abduction that happened on Thursday the 2nd of August 2018.

She called her husband on phone around 3:30pm on the day to inform him that she was kidnapped with their daughter on her way to a psychiatric hospital.

The secret plan to extort N15million from her hubby, Alhaji Muriano Kabir was exposed when he informed the police.

In her confession, Hadijat said:

“I bore four children for him. He has two wives and I am the first. I have been with him for 27 years. I did not use my daughter for ritual. I just wanted money from my husband.

“He would always shout at me if I requested for money. He would not even tell me gently, he would always flare up. I was a fashion designer before I married him. My daughter has been convulsive since she was a kid.

“My family members would call me to ask for money even my mum but I do not have any money to give them. I would ask my husband for money, he would not give me. I asked him for just N500,000 and he refused. We were not kidnapped. We just hid at a place and contacted him.”

Her huband however denied the negligence allegations, claiming that he opened a shop for her and also gave her an additional N300,000 for upkeep in addition to the N150,000 their son gave her recently.