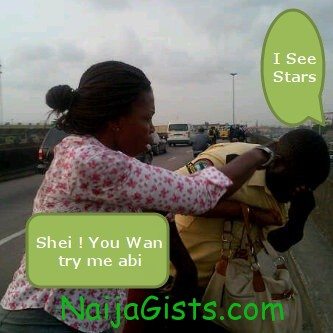 One Oluwakemi Saheed, was earlier today brought before an Ota Magistrates’ Court in Ogun for allegedly slapping a man publicly.

The 32-year-old resident of No. 12 Tolani Street, Iyana-Iyesi near Ota, is facing a charge of assault.

According to Police Prosecutor Chudu Gbesi, the woman committed the offence on Nov. 4 at 7.00 a.m. at Odan Otun, Itele, near Ota.
The accused assaulted the complainant, Mr Jinadu Kazeem, by slapping him in the public during an agreement, Gbesi told the court.

The offence contravened Section 351 of Criminal Code, Laws of Ogun, 2006.

The accused, however, pleaded not guilty to the charge.
While ruling on the bail application of the accused, the Senior Magistrate, Mr G. E. Akan, granted her bail in the sum of N50,000 with two sureties in like sum.

Akan said that the sureties must reside within the court’s jurisdiction and should be gainfully employed with an evidence of tax payment to Ogun State Government.

He adjourned the case until Jan. 19 for further hearing. [NAN]