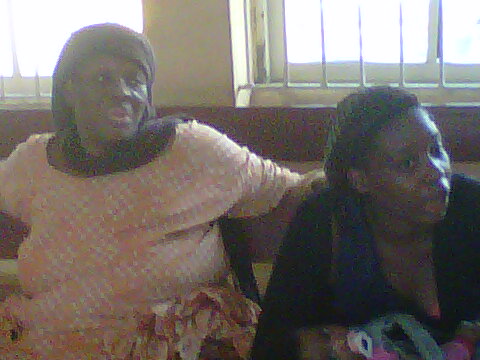 A 44-year old housewife, Mary Onu has been arrested after she allegedly stole a Nissan Infiniti SUV belonging to a car dealer and used it to sow a seed offering to her church prophet, Solomon Orimisan of the Celestial Church of Christ, Idimu, Lagos, Nigeria.

The incident happened at Gabriel Bell close, Bamishile Estate in Idimu where the church was located.
Onu was arrested with her daughter, Alice who signed the agreement and handed over the Jeep to Prophet Orimisan after she obtained a token sum of N500,000 in exchange for the vehicle, PM Express reports.

The Delta State-born Mary who was a member of the church went to the prophet and told him that he wanted to appreciate him for his assistance and prayer to her and her family which had benefited them.

She told him that she wanted to sow a seed offering with the Infiniti model QX56 which the market value is over N2 million.

She asked him that he should pay only N500,000 as a token and which an excited Orimisan agreed and paid the money into her account.

P.M.Express gathered that she drove the SUV to the church with the owner, who is a car dealer and introduced him as his driver.

When the prophet came out and saw the car dealer, he asked him to leave and informed him he had settled with Mary.

It was then the prophet realized that Mary have scammed him as the owner explained what transpired between him and Mary before the vehicle was brought to the church.
The matter was reported to the police who trailed Mary and her daughter, Alice for several weeks and later arrested them in their hide.

At the station, Mary confessed to the crime but claimed she had already spent the money to solve her personal problem.

They were charged before Magistrate’s court sitting in Isolo on Thursday with conspiracy, obtaining under false pretence and stealing under the Criminal Code.
They pleaded not guilty.

The prosecutor, Mr A.U. Ojei told the court that he was not objecting the bail condition, but the court should use discretion to grant them bail so that they will face trial.

The presiding Magistrate, Mrs A.K. Shonubi granted them bail in the sum of N200,000 with one sureties in like sum.

They were remanded in prison custody pending when they will perfect their bail condition.
The matter was adjourned till 24 November 2016.