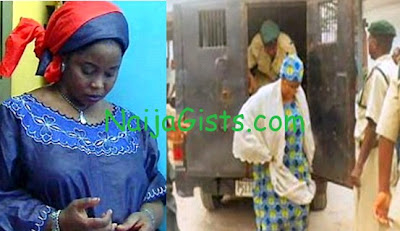 Since her drug trafficking arrest back in 2006, Yoruba actress Taiwo Akinwande aka Yetunde Wunmi has never stopped talking about her shameful venture into drug business.

In this latest interview with The Entertainer, the actress has confessed once again.

Read her confession below;

It was on September 19, 2006. I was billed to travel to the United Kingdom. So I got to the airport early enough to catch my plane. But then, I was arrested by the National Drug Law Enforcement Agency at the Murtala International Airport in Lagos. I was arrested on drug related offences. Initially, I thought I was in a dream, but it later turned out to be a reality. It was a sad experience for me to remember because that event almost cost me my life. I ended up serving a two-year-jail term. Really, I lost so many things to that incident. And it did a lot of damage to my image  as an actress and  even among my colleagues in the industry. It’s my only regret in life that I had to get involved in drugs. But I thank God that I came out of the mess after serving a two-year jail term. I also thank God that though the situation I found myself was that bad, the news of my drug offence wasn’t that of my obituary. Truly, I have learnt my lessons  the hard way.

I have said it earlier that I have learnt my lessons the hard way. I learnt that nothing in life is permanent, that there are no permanent friends and enemies. During my travails, I learnt lessons about the ups and downs of life. For instance, a rich man today can become poor tomorrow, and a poor man today can become rich tomorrow. Even, I learnt my lessons about death. That, though life is good and worthy to live, death remains the end of all souls. It’s the end, no matter who you are. It was really, a sad story to tell, but I thank God I am still alive to tell the story.

I lost almost everything. For instance, I lost my privacy.  I lost my popularity that I have worked hard for, for about three decades. I lost some of my close friends and my relationship with many people broke-up as a result of the sad incident. Nobody would like to relate with an ex-convict. But, honestly, some of them showed great concern and understanding. They saw my problem as a phase in the course of my career and life as well. They really gave me hope that time heals all wounds and that eventually came to pass.

I wouldn’t want to mention names, but there were some of my colleagues that despised me while so many others showed great understanding. They showed me love and concern. It was God that really intervened and strengthened me after I served my two-year jail term. So many people treated my case as that of the prodigal son. The Association of Nigeria Theatre Practitioners (ANTP) actually brought me back to life. They rekindled my hope and my career was put back on track. I was able to overcome the sad experience through the unflinching support of everybody that stood by me during the trying period. It was terrible indeed. But today, the rest is history.

How I got back on  my feet

It was the grace of God. Even at a particular point in time, I became confused. I didn’t know where to start from, but God really used some people in the entertainment industry to put my career back on track. Since then, I have been enjoying a breakthrough and I’m now back on my feet.

The truth is that I didn’t allow my past experience to weigh me down. I didn’t allow it to disturb my future. But I was able to cope during that period through the grace of God. My humility also played a very important role in getting me back on track.

It was difficult for me to cope, initially, but one virtue God gave me is humility. And that helped me a lot. Even before the sad incident, I was a very humble person. For me, popularity didn’t get to my head. I don’t brag about anything, but I know quite well that my humility actually helped me a lot during the trying period. I was humble after my humiliating experience, and I felt real great remorse for what actually happened to me. I regretted, and still regret  it. In the end, I saw it as my destiny and the sad experience actually humbled me in life.

With God, everything is possible. Since the sad incident, I have started my life anew. I have repented from all my wrongdoings. I even went to Saudi Arabia in 2011 to perform the Hajj and that afforded me the opportunity of telling Almighty Allah all of my earlier trespasses. I confessed my sins in His presence and I promised never to return to such sins. Today, all that is now in the past. Today, everything is new in my life, and I’m always grateful to Almighty Allah who actually preserved my life during that trying period. Now, I’m hopeful that God has answered my prayer because since the time I came back from Saudi Arabia, everything, I mean my whole life, has become new and I’m back on my feet with renewed hope and vigour.