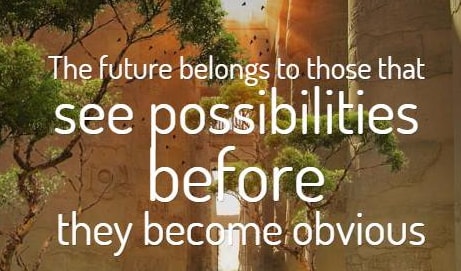 John Sculley (Apple’s former President and CEO) once said, “The future belongs to those who see possibilities before they become obvious”.

On August 2, 2018, the media was flooded with a viral news. Business Insider, Financial Post, Washington Post, The New York Times, Bloomberg and numerous financial tabloids all carried what financial analyst termed the 8th wonder of the financial world. Apple Inc. broke financial records to become the first American public company ever to cross $1 trillion in value.

It will interest us all to know that just two decades ago, it was almost bankrupt!. Apple has become the world’s first publicly traded company to be valued at $1 trillion – 42 years after Steve Jobs and Steve Wozniak began the firm in a Silicon Valley garage.

Apple’s inspirational ascent from the brink of bankruptcy to the world’s most valuable public company has been a tug of war in a business world studded with tech gladiators. Apple surmounted stiff competitions with global tech giants like Hp, Microsoft, Sony etc., to pioneer a financial record that is unprecedented in the history of American public companies.  Many times, Apple has been increasingly outgunned and outmaneuvered in the personal-computer market it helped invent, but it kept churning out iconic products and cutting-edge/smash-hit devices such as the iPhone and iPad.

The origin of the historic trillion dollar mark of Apple all started with three people: Steve Jobs, Steve Wozniak and Ronald Wayne. After the trio founded Apple on April 1, 1976, it was Ronald Wayne who drew the original partnership agreement and the Apple I manual. Wayne also drew Apple’s first logo. The logo depicted Sir Isaac Newton sitting beneath a tree with a solitary apple dangling over his head. It was later replaced by the iconic Apple logo we have today. In exchange for their work, Jobs and Wozniak were rewarded with 45 percent each of Apple’s ownership, while Wayne held the remaining 10 percent. In what could be termed as the worst financial decision ever, Wayne relinquished his stock in the company just twelve days after (April 12, 1976). Wayne sold his shares for a paltry sum of $800, and eventually received an additional $1,500 to seal the deal. “Nobody could have anticipated how big Apple would become,” Wayne says.

Today, 10 percent of Apple would be worth about $100 billion. That kind of a fortune would make Wayne one of the richest people in the world. But instead of being fabulously wealthy, Wayne lives modestly in Pahrump, Nevada — a desert town between Las Vegas and Death Valley — a long way from Silicon Valley. If he’d held on to his 10 per cent of the company, he could be worth more than $50bn as at today. Instead, almost four decades later, Jobs is an icon, Wozniak is fabulously wealthy, and Wayne lives on his monthly social security cheque in a small town not far from Las Vegas. Imagine one of the Co-founder of Apple living on pension!  It is sympathetic that of all the three co-founders, Ronald Wayne’s legacy and name has been totally obliterated from the future of Apple!

It is interesting to note that back then in 1976 while both Jobs and Wozniak were young and broke, Wayne had assets, including a house, and feared that the financial burden would fall on him if the deal went awry. Wayne’s decision to leave the start-up cost him big. Wayne explained later that he was concerned about the implications of failure and also that the company was financially demanding.

Richard Carswell once said, “Failure isn’t the worst possible result. Not trying is. If you try, you can succeed; if you won’t try, you have already failed.”  He who doesn’t dare will not get his share. Wayne played safe in 1976; fast tracked to 2018, it became very obvious to Wayne that playing safe is the biggest risk! The core truth in entrepreneurship journey is that those that give-up don’t go up.

Today Ronald Wayne is worth $ 300,000 less than the million dollar mark. Wayne never used an iPhone until 2011! Until 1995, he didn’t even own a computer, and it took him until 2011 to acquire his first Apple product: an iPad, given to him by the organizers of a tech event in Brighton. Swami Vivekananda once said, “Take risks in your life. If you win, you can lead. If you lose, you can guide!”

Ronald Wayne said it was demanding on him financially. If only he saw today, his decision of 1976 would have been so different. Everything of lasting value is highly demanding. Greatness is not a product of convenience. The greatness of tomorrow begins with the sacrifice of today. The pain of knowing you had the opportunity at a point in life to change the course of your life is the greatest pain of regret to live with.

As I read through Apple’s financial report, my mind goes straight to Wayne on how he would have reacted reading through the same news that the company he cofounded is the first company to hit the trillion dollars mark. I wonder what will be going on in Wayne’s mind and probably in the mind of his children, his family and friends. Only God can describe what will be going on in their minds!

My candid advice is this: Where you see a future don’t fail to invest, sacrifice, endure, persist and believe. Don’t give-up on that project, idea, partnership and that person. They may be your goldmine for the future! T. S. Eliot said, “Only those who will risk going too far can possibly find out how far one can go.”

This is just the beginning for Apple as Apple’s stock has been surging this month as anticipation mounts for the next generation of iPhone, expected to be released in September. The bitter truth is that, no matter what fortune that will ever go the way of Apple, Wayne will never have a part of it.

He may have been one of the three that wrote down the origin of Apple and for this, history might be mild on Wayne, but he will never again be part of Apple’s future!  Wayne couldn’t picture the future of Apple in 1976 and today he is unable to feature in it. Fortune don’t flow in the way of convenience, it flows to where sacrifice and tenacity hold sway. Greatness in life is not a product of convenience. It takes sacrifice.

I always tell my mentees never to quit because once you learn how to quit, it becomes a habit! Only those who dare to fail greatly can ever achieve greatly.

QUOTE OF THE WEEK: “There are risk and cost to actions. But they are far less than the long range risks of comfortable inactions”- JFK

The Job You Are Looking For Is Not Out There; It Is Right Inside Your Gift!
Productive Tasks You Can Perform In Sleep!!