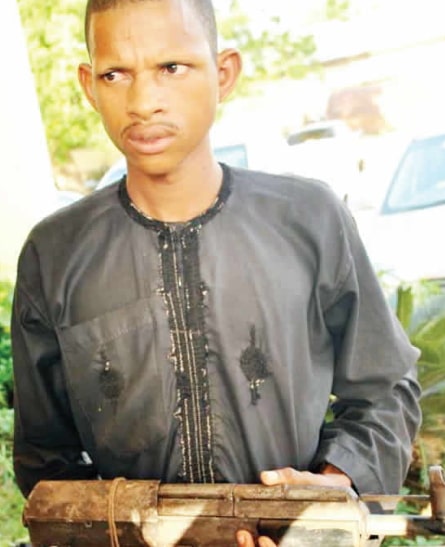 By Enyioma Opara, Metro Plus

THE Niger State Police Command has apprehended a member of a three-man gang of kidnappers operating in Kwakuti in the Paikoro Local Government Area of the state.

The suspect, Abubakar Umar, 20, of Ungwan Kaura Zungeru in Mashegu Local Government Area, was arrested by a team of police detectives attached to the command’s Special Anti-robbery Squad, following a tip-off.

It was reported that sometime in 2015, the gang had collected N500,000 from one Alhaji Bahago in the area so that he would not be kidnapped.

Northern City News gathered that in June 2018, the same gang of kidnappers called the victim again and demanded N2m.

The police said the gang had been operating unchecked in Kwakuti in Paiko for over seven years until one of them was arrested.

Umar told our correspondent that kidnapping business was full of risk, describing it as “a game of chance but deadly.”

“For one to survive in this country, you must take risk, otherwise people will tag you a lazy man. I did not have any formal education, the farm work l’m engaged in is not yielding good money and that was why I joined the fast lane to make money,” he said.

He stated that he had made some cash from the crime, adding that he usually threatened wealthy victims who parted with money to avoid being kidnapped.

“We make cool money in this business, most times we call our rich victims to drop the ransom at a particular spot or risk being kidnapped and honestly they will do as we said because they are not ready to risk their lives,” Umar stated.

Asked whether he regretted his action, Umar said,”I am not regretting anything as I said earlier; kidnapping business is full of risk, you either succeed or you are trapped.”

The Police Public Relations Officer, Muhammad Abubakar, explained that the suspect was nabbed after his gang demanded N2m from their victim.