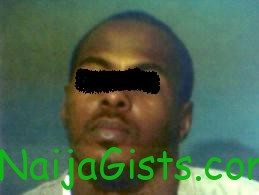 A young man identified as Lawrence Ufan Ette, has allegedly struck his girlfriend to death with a stone during a fight in the victim’s house over her phone.

The 23-year old girl, Miss Roseline Ijeoma Christopher, was allegedly killed by her boyfriend over her phone which he allegedly stole from her room when he was on a visit.

Miss Dorothy Bassey, the landlady of 13, Academy Street, Calabar, where Ijeoma and her siblings along with their aged mother live, told reporters that Ette and Ijeoma had been in a relationship for a while but Ijeoma’s mother told Ette to stop coming to their house because of his bad behaviour towards her daughter.

However, according to Bassey, against her instruction, Ette kept sneaking in to see Ijeoma, especially at night.

On the fateful night, Ette sneaked in as usual to see Ijeoma but a misunderstanding ensued between them and she asked Ette to leave her room.

The landlady said: “Unknown to her, when he left, he took her phone and after sometime, Nne, Ijeoma’s younger sister wanted to chat on a social network and asked her elder sister to give her the phone. That was when Ijeoma discovered that Ette had taken the phone with him when he left. “When she told Nne about the phone, Nne was angry and decided to go after Ette for the phone.

But while Nne took the main exit and headed towards Target Street, Ette sneaked back to the house through the shortcut from Webber Street, missing each other on the way.” It was gathered that when Ette went back to Ijeoma’s house, they exchanged words and Ijeoma asked him for her phone but he refused to give her. And a fight ensued between them.

“She did not scream while they were fighting because she wanted to send him away without letting her mother know. That was her mistake as Lawrence dashed out of the room to pick a stone and went back to hit her with the stone,” said the young landlady, who said Ijeoma was her friend.

It was also alleged that after killing the girl, Ette attempted to dispose her body by throwing it over the fence.

“He carried her on his shoulder towards the backyard and was trying to throw the body over the fence. But unknown to him Ijeoma’s mother, who was alerted by the commotion in the house called Nne to check their backyard. When Nne went towards the backyard to find out what was wrong, Lawrence abandoned Ijeoma’s body and fled.

“Since it was dark, a neighbour with a torchlight helped them to find the body inside a drainage channel,” she said.

The body  is now lying at the Calabar General Hospital’s mortuary. The assailant, according to a source at his 10 Anating Street in Calabar South residence  said “ Ette hurriedly came here and packed some clothes into a bag and left and we have not seen him since then.

“His mother died two months ago and his father is hypertensive. Now he has gone to kill his girlfriend,” the source added

DSP John Umoh of  Atakpa Poilce Station where the case was reported, said the matter was being handled by the homicide unit of the police and promised to arrest Ette as soon as possible.

Na wa o which kind life is this!