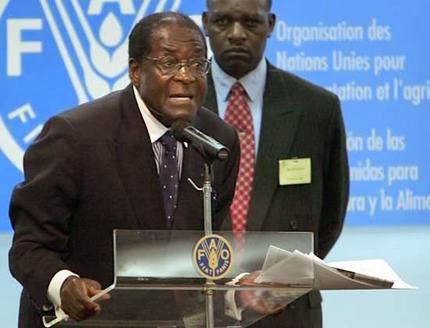 Sept 27, 2013 – Zimbabwe’s President Robert Mugabe Blasts EU & US For Placing Sanction On His Country “Shame On US & UK”

The President Of Zimbabwe Mr Robert Mugabe yesterday criticized the United States of America and former colonial power Britain and its allies for trying to control his nation and its resources.

“Zimbabwe is for Zimbabweans, so are its resources. Please remove your illegal and filthy sanctions from my peaceful country.”

Mugabe said that the sanctions imposed by the EU and the U.S. violated the UN Charter on state sovereignty and condemned them as a “foreign-policy tool to effect regime change”.

The US and the EU imposed sanctions on Zimbabwean state firms and travel restrictions on Mugabe and dozens of his associates after a violent 2000 election, and at the start of sometimes violent seizures of white-owned commercial farms for black resettlement.