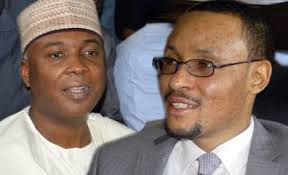 The saying: “He who must come to equity must come with clean hands” has eventually caught up with Danladi Umar who has running from pillar to post to cover up his transgressions since the news of his 10Million Naira bribery scandal broke out.

The guiding principle in the anti-corruption fight will be totally lost if the “almighty arbiter” in a corruption case is found enmeshed in corrupt practices and yet, wants to prosecute other corrupt persons.

The Code of Conduct Tribunal (CCT) as an establishment of the government is not new to the system, but sincerely speaking, their activities in lately suggests the reasons they’ve been in the news time and again.

The popularity of CCT was only made more noticeable when they opened an allegation against the Senate President, Bukola Saraki on false declaration of assets while he was governor of Kwara state in 2003. Although, there are doubts if the allegation came on the ground of altruism, because majority knew the proceedings began when the leadership of the Senate asked questions about some unremitted money from the EFCC’s account into the Federation account under the leadership of Ibrahim Lamorde the erstwhile Chairman.

However, the plots and innuendos above call for some logical questions to be asked. What relationship exists between Lamorde and Danladi Umar? Why Umar was hurriedly (fresh after he was suspended) opened a case against the Senate President, who instituted a probe into the alleged corruption against Lamorde? The morality question on Danladi Umar’s personality is also another talking point.

Danladi Yakubu Umar has been swimming in an ocean of accusations relating to corrupt practices, official impropriety and victimization of junior staff under his watch.

In a twist to the corruption allegations hovering around Umar, his personal assistant, Ali Abdullahi Gambo, was docked by the Economic and Financial Crimes Commission, EFCC, before an FCT High Court on charges of conspiracy, bribery and abuse of office

Gambo’s arrest and subsequent arraignment followed a petition that he received a bribe of N1.8m on behalf of the tribunal chairman ostensibly to quash a case before the CCT.

Investigations showed that the EFCC did invite Umar on March 18, 2013 over an allegation of illegally demanding the sum of N10m from one Taiwo Rasheed, a retired comptroller of customs, who was being prosecuted at the time by the CCT for failing to declare his assets while in office

The retired customs officer had discreetly reported Umar to the police who had advised him to play along by paying part of the bribe money. Rasheed subsequently paid the sum of N1.8m into account of the personal assistant of the CCT chairman

However, aggrieved former staff members at the CCT say the illegal actions of Umar go beyond corrupt enrichment, Danladi is equally accused of victimization of some staff who subtly or openly condemned his corrupt acts.

On May 3, 2013, three members of staff of the tribunal – the accountant, Shotunde Adeyinka, and two other administrative staff, Johnson Owopetu and Lucky Eronlan – were transferred to Ondo, Katsina and Bauchi states respectively for allegedly opposing some of the corrupt actions of the CCT boss

One of the three claimed that they were victimized for calling the attention of the chairman to irregularities in the spending pattern of the tribunal, a move that angered him

Umar was also accused of awarding contracts without following laid down guidelines, issuing full contract payment to contractors rather than the legal process of issuing mobilization fees first. Other allegations against him are lopsided appointments, transfers and promotions without board approval and with total disregard for federal character.

Mr. Umar was equally accused of awarding contracts for already completed projects and collection of bribes to facilitate such approvals and also using proxies to corner juicy contracts. Danladi was particularly accused of diverting monies amounting to about N76.53m for various contracts between February and May, 2011

After thorough investigations into his behavioural pattern and character strength, it was found out that Umar is a chronic and an incurable borrower of funds. In 2010, he is alleged to have borrowed N 370,000 from the zonal coordinator of the Tribunal and wouldn’t pay, which almost went off ugly.

With the crime committed by both the CCT Chairman and his aide, Umar should be made to face the law in compliance with the recommendations of the former Attorney General of the Federation Mohammed Adoke, who recommended the two persons to be arrested and investigated for alleged corruption. One person was arrested and prosecuted while the other person, who is the current chairman of the CCT, has subtly evaded arrest and prosecution, with the support of his highly placed ‘bosses’, perhaps.
CCT is an important establishment in the country and requires man of honour and integrity to guard its sanctity. It cannot afford to be manned by someone who is entangled in a web of accusation of corrupt practices.