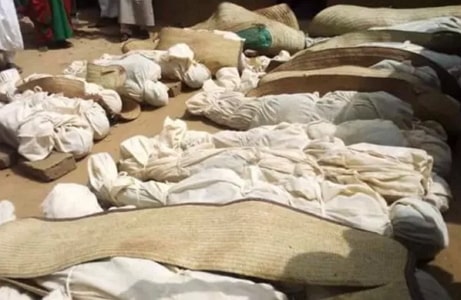 The bodies of the 18 farmers killed by bandits in Batsari local government area of Katsina State have been buried in Katsina amidst tears by families and sympathizers.

According to the NAN, the farmers were killed in their farmlands at Yar-gamji community on Tuesday morning.

The police later evacuated the corpses and dropped them at the palace of the District Head of Batsari, Alhaji Tukur Muazu Ruma, which triggered a protest by angry youth.

The angry youth later took the corpses in vehicles to the palace of the Emir of Katsina and Katsina Government House, where Gov Aminu Masari addressed them and called on them to remain calm as the government was taking steps to address the problem.

The funeral prayer was led by the Chief Imam of Katsina, Sheikh Mustapha Ahmad at about 11:00 am, on Wednesday, at the palace of the Emir of Katsina.

The Chief Imam prayed to the Almighty Allah to forgive their sins and grant them eternal rest.

He also prayed to Allah to avert future occurrence.

The District Head of Batsari and the Transition Committee Chairman of the area, respectively urged security agents to intensity efforts towards protecting people’s lives and property in the area.

They also urged people in the area to continue to be law abiding as the government was taking steps to address the problem.

The deceased were buried at Dantako cemetery in Katsina town.