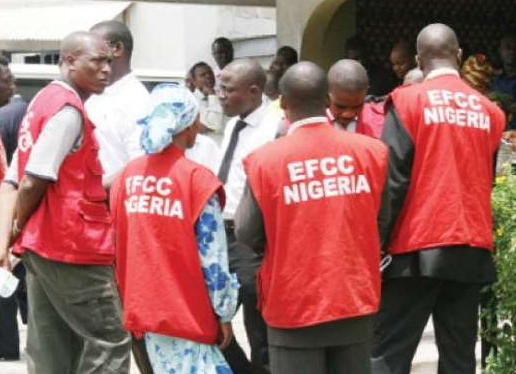 Two other suspects were at large, but the EFCC has launched manhunt for them.

Some of those whose benefits were diverted actually were said to have died in the war against Boko Haram in the Northeast.

According to investigation, the officers arrested were from the Military Pension Board, including a Wing Commander and Lt. commander.

Other accomplices were Branch Manager and Relationship Manager of United Bank for Africa (UBA).

It was gathered that the auditors of UBA raised the alarm when its auditors discovered that huge parts of the funds were “cashed across the counter in a suspicious manner”.

Based on the alert by the bank, the EFCC stepped in to crack how the fraud was perpetrated.

A top source in EFCC said:

“We have arrested a serving Wing Commander, a Lt. Commander and four others for N339million death benefit of some deceased military officers and men. Two others are at large but we have watch-listed them.

“The affected military officers were both cashier and computer operator in Military Pension Board and they connived with six others to carry out the fraud in UBA branch, Wuse Zone 3 branch.