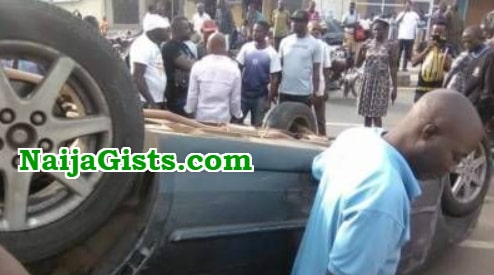 2 kids have demonstrated bravado by stopping two armed robbers and kidnappers who attempted to make away with their father’s car.

The children locked the car steering with the robbers, which made the car to hit a wall and somersaulted.

It was gathered the father of the children simply identified as Doctor had parked to drop his children at the Brother Pius Nursery and Primary School along Akenzua Street off Airport road in Benin City when the two robbers asked him to step out of the car.

The man stepped out and the two robbers/kidnappers entered the car and drove off with the children inside.

Sources said children engaged the robbers/kidnappers inside the car and it veered off the road and hit a wall of a building before it somersaulted.

The two robbers managed to escape while sympathisers rescued the children currently receiving treatment in an undisclosed hospital.

Edo police spokesman, DSP Chidi Nwabuzor, who confirmed the incident, said one of the robbers was pushed out of the vehicle by the children.

DSP Nwabuzor said the two suspects escaped and that the children did not sustain any injury.

He said efforts are on to arrest the fleeing robbers.