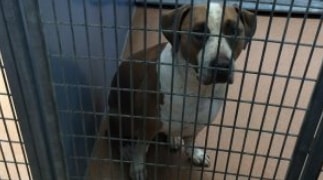 3 men were today sentenced to 1 month imprisonment by in a  Magistrates’ Court sitting in Minna, Niger State today for stealing a dog.

The convicts – Isaac Saba, Philip Daniel and Ayo Ojo – were earlier arraigned on a two-count charge of conspiracy and theft.

They all pleaded guilty to the charges.

Magistrate Hamza Muazu summarily sentenced the convicts after they pleaded guilty to the charges.

Muazu ordered each of them to serve a prison term of four weeks.

He, however, gave each of them an option of N2, 000 fine or to serve the prison term should they fail to meet the condition.

Earlier, the police prosecutor, Sgt. Aliyu Malami, told the court that one Mary Adama of Kpakungu community in Minna had reported the matter at the police station on April 3.

Malami said the convicts had conspired among themselves to steal the dog, valued at N10, 000.