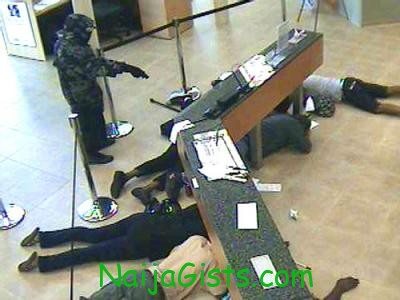 According to a report on daily times, at least 3 people including a mobile police officer, were on Thursday killed in a robbery attack on the First Bank branch at Sabongida-Ora, in Owan West Local Government Area of Edo State.

An eyewitness, Collins Amoni, said eight robbers used dynamite to blast their way into the banking hall at about 4pm.

He said the robbers, who carried out their operation for more than 40 minutes, made away with an undisclosed sum of money. naijagists.com

Amoni said the bank had just reopened for business in August after two years of closure due to incessant robbery attacks in the area.

“The robbers came without a car and left the same way. It is quite unfortunate that their mode of operation has gone beyond the comprehension of our security agencies.”

Confirming the robbery, the Edo North Area Commander of the Nigeria Police Force, Gabriel Haruna, said the police are on top of the situation.

According to him, the robbers only succeeded in taking away money meant to be loaded into the bank’s ATM machine.

“It is true that the incident happened on Thursday afternoon and one of my men was killed during the attack.

“The robbers gained entry into the bank with explosives, but could not gain access into the bank vault. They only went away with money that was to be loaded into the ATM machine,” Haruna said.