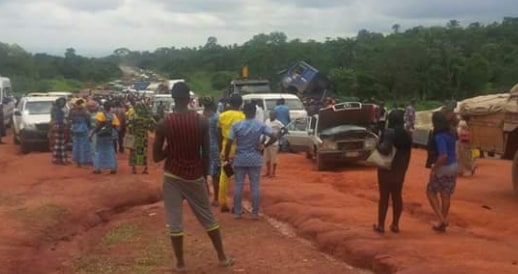 At least 3 persons have been confirmed dead in a multiple accident that occurred at Ewu hill along the Benin-Auchi-Abuja high way.
The accident was said to have occurred when a truck driver lost control and rammed into other vehicles.
According to eyewitnesses, three persons died on the spot while 10 others sustained injuries.

“It was a multiple accident, 28 people were involved, three died, 10 injured while others remain unhurt.”
Okon stated that officials of FRSC were at the scene of the accident on time to carry out rescue operation and ensure that the obstructions were cleared off the road.

“The problem is that, that place needs to be dualized. Construction work is going on there, but at snail speed. If it is not dualized, it will continue to happen, just like what happened at Gwagwalada-Abaji-Lokoja in those days.”