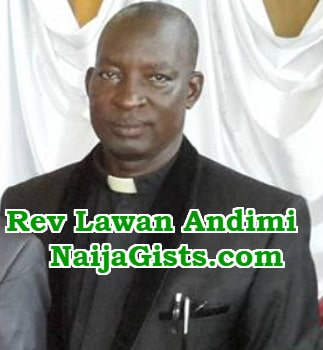 The kidnapped district chairman of the Church of the Brethren in Nigeria (EYN) in Michika County, in northeast Nigeria’s Adamawa state, had stated in a video that he trusted in God should he lose his life to Islamic terrorists of Boko Haram. The rebel militants executed the father of eight children on Monday (Jan. 20), the head of the Christian Association of Nigeria (CAN) confirmed today.

Ahmad Salkida, a Muslim journalist who has been a primary means for Boko Haram to release information, reported in a tweet today that the group beheaded Pastor Andimi on Monday afternoon.

“To break some news items can traumatize. I’m battling with one of such. Reverend Andimi, abducted by #BokoHaram was executed yesterday,” Salkida tweeted. “Rev. Andimi was a church leader, a father to his children and the community he served. My condolences go to his family.”

CAN President Samson Ayokunle today confirmed in a comment to the Nigerian newspaper the Daily Post that Pastor Andimi had been executed.

Pastor Andimi had said in a Boko Haram video released by Salkida on Jan. 5 that he hoped to be reunited with his wife, children and colleagues.

“If the opportunity has not been granted, maybe it is the will of God,” he said. “I want all people close and far, colleagues, to be patient. Don’t cry, don’t worry, but thank God for everything.”

Pastor Andimi, who also served as chairman of CAN’s local chapter, was kidnapped on Jan. 2 when Boko Haram attacked two Christian communities in the area.

In the video released on Jan. 5, the pastor called on church leaders to speak out for him and urge Adamawa Gov. Ahmadu Fintiri to intervene to secure his release.

“I have never been discouraged, because all conditions that one finds himself is in the hand of God,” Pastor Andimi said in the video.

Strongly Worded Statement
CAN President Ayokunle said in a press statement that the execution of Pastor Andimi was “gruesome, unfortunate and a shame on the federal government,” according to Nigerian newspaper The Nation.

“What has become of intelligence-gathering of our security agencies?” Ayokunle said in the statement. “Is this government and the security agencies still claiming that the war against these criminals in religious garments has been won despite all the killings? Is the government sincere in fighting these terrorists or merely paying lip service to the war against the insurgency? Is there any hope that our security is guaranteed under this government?”

CAN’s director of legal and public affairs, Kwamkur Vondip, reportedly said in a statement that the church did “everything within her reach to secure the safe release of this pastor gentleman but it was not possible because they didn’t have the military power to do so,” according to The Nation.