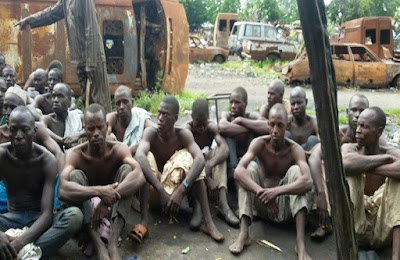 Nwachukwu said that the military had intensified campaign through coordinated air and land offensive against the insurgents.

“Air and artillery bombardments were backed by long range patrols and ambushes targeted at preventing fleeing Boko Haram insurgents from escaping and also denying them access to logistics supply,” he said.

Nwachukwu said that the sustained operations had brought the insurgents to the brink of defeat thereby forcing many of them to surrender.

“In their testimonies, the insurgents revealed that most of their enclaves are untenable which made life unbearable for them.

“The relentless offensive forced many of them to surrender to the troops.

“Those who surrendered are currently undergoing rehabilitation and deradicalisation process under the Federal Government’s Safe Corridor operation.

“Undoubtedly, the ongoing operations by troops of Operation LAFIYA DOLE are yielding results by putting enormous pressure on the insurgents.

“Evidently, this led to the recent plea by one of the factional group leaders calling for international support”.
The command’s spokesman called on Boko Haram insurgents to renounce their heinous acts and surrender.

Nwachukwu reiterated the commitment of the Nigerian Army to guarantee their safety and well-being.