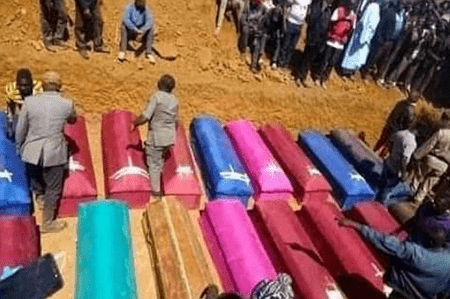 Friends , family member,  sympathisers and mourners wailed and weep as the 23 victims of gunmen attacks in communities of Bokkos local government of Plateau state were lowered into the grave.

A mass grave was already prepared in Kwatas village for the burial by members of the predominantly Christin community.

As early as 8am Thursday morning, family members and Sympathisers had already assembled at Luna hospital, a private owned hospital in Bokkos where the bodies were deposited since the day of the attack.

After a brief prayer session for the victims at the premises of the hospital at about 10am, the bodies were moved into some vehicles for inward movement to the mass grave site in Kwatas.

The bodies were later interred after a brief rites performed according to Christian doctrine by a group of religious leaders led by Rev Matthias Sunday.

Though no presence of government official or the state governor Simon Lalong who was said to be in Wase and Shendam for the installation ceremony of newly upgraded traditional rulers.

The clergy men who performed the burial rites at the mass grave expressed dissatisfaction with the level of insecurity in the country which resulted in the untimely death of the victims.