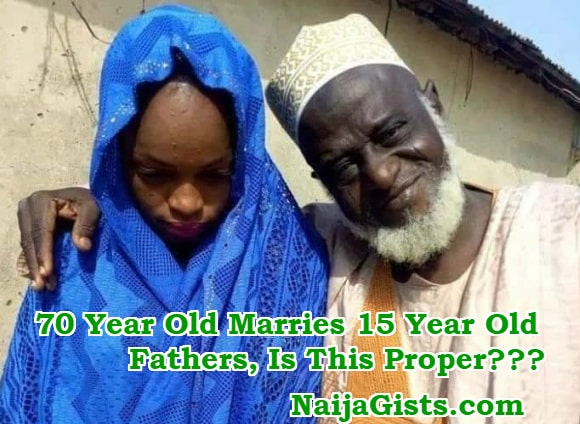 Although many Nigerians, especially southern Christians, as expected, were horrified and frowned at this piece of information, for many, it was not news.

This kind of union would be the latest of an infinite number of such marriages in northern Nigeria, and else where around the Islamic world.

Like countless men before him, Mr Chanji has not acted out of the blue, but rather, has towed the line of a certain “prophet”, and has in fact followed principle and dictate of a certain religious ideology.

There was a certain “prophet” who, not only married a 6 year old and consummated the marriage when the child was 9, also took the wife of his own adopted son, and cited a certain god’s directive to do so.

Although some adherents of this religion would have us believe that the child was not 6 when this man, who himself was 55 at the time , married her, there are several references in the most authentic Hadiths of this religion, stating that she was in fact 6 when the man took her as wife!

It is recorded that she went to live with him at that tender age, and they “consummated” -i.e began engaging in sex- the marriage when she turned 9. There are even references to how the little girl carried her dolls to the house of this grown man when she went to live with him, and how she played with other little kids in the area. So regardless of the argument and an attempt to change the narrative today, we know this little child was prepubescent.

Now, a man in his mid 50s having sexual relations with a prepubescent girl without the cognitive ability to understand, or maturity to approve, is hardly something any god would permit let alone approve.

Another fact is that, one of the other wives of this same “prophet”, Safiyya by name, was a Jew who was captured in one of the over 60 battles that this same man either contrived or led during his lifetime, she witnessed the slaughter of her entire family at the hands of this same man -who was almost 60 at the time-and his army, while she was still a teenager.

In today’s estimation, this would clearly be seen as child molestation and abuse, especially considering the fact that her family had been slaughtered and she obviously would not have consented to such a marriage in the first instance, in the face of such reality…

It is on record that most of the wives of this “prophet” were far younger than him and we’re pretty, in fact, after most of his battles, it is recorded that he usually appropriated the most pretty women to himself, one of the reasons why he married more women than his own revelation allowed…

According to some of the most reliable sources of the religion founded by this man, we read how:

“Aa’ishah (may Allaah be pleased with her) said: “The Prophet (peace and blessings of Allaah be upon him) married me when I was six years old. Then we came to Madeenah and stayed in Bani al-Haarith ibn Khazraj. I fell ill and my hair started to fall out (due to the illness; then it grew back thick again). My mother Umm Roomaan came to me whilst I was on a swing and my friends were with me. She shouted for me and I came to her, not knowing what she wanted. She took me by the hand and led me to the door of the house. I was out of breath and we waited until I had calmed down, then she took some water and wiped my face and head, then took me inside. There were some women of the Ansaar in the house, and they said: ” ‘Alaa al-khayri wa’l-baraka wa ‘ala khayri taa’ir (blessings, best wishes, etc).” My mother handed me over to them and they tidied me up, then suddenly the Messenger of Allaah (peace and blessings of Allaah be upon him) was there. It was mid-morning, and they handed me over to him. At that time I was nine years old.”

And then, we also read how:

“Khadeejah died three years before the Prophet (peace and blessings of Allaah be upon him) migrated to Madeenah. He stayed alone for two years or thereabouts, then he married ‘Aa’ishah when she was six years old, and consummated the marriage when she was nine years old.”

What is problematic today is that many followers of this man insists that he is the “perfect example of human conduct” and so must be emulated. To this day, their Shariah Law, according to experts, permits child marriage.

There are even those who argue that since his child wife was well known to have been his “favorite”, that account gives many of his male followers the excuse and license to marry little girls, a thing that has been proven that many of them really prefer.

We are all witnesses to how a former northern governor went to import a 13 year old Egyptian girl as wife, and also tried to invade our National Assembly with his ideology.

Considering that child marriage is driven by poverty and has many effects on girls’ health, considering the increased risk of sexually transmitted diseases, cervical cancer, malaria, death during childbirth, and obstetric fistulas and so on, which right thinking individual with a heart, would support the marriage of a grown man to child?

Our little girls, especially in the north, are at increased risk of premature birth and death as neonates, infants, or children, if this practice is not discouraged, and this is not counting those who have died as a result of being pregnant, even though they were kids themselves.

Till date, northern Nigeria has the highest rate of VVF, mother and child mortality, alimajiris, underage Internally Displaced Persons, IDPs and so on, and yet, we see an increase in child marriages, all on the example of a man who’s not even Nigerian, who lived 1400 years ago in an Arabian desert?

May GOD help us….

How France Christmas Market Shooter, Cherif Chekatt Was Killed
Jessica Starr Of Fox 2 News Cause Of Death Is Suicide By Hanging – Medical Examiner