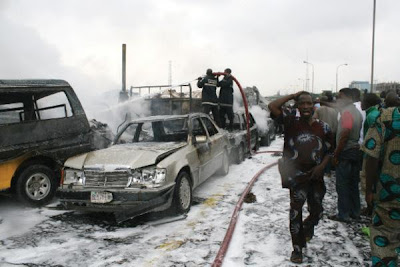 The accident happened around 11pm on Tuesday while they were returning from a progress meeting in Awka enroute Umuahia.

One of the survivors of the incident, Sunday Iroegbu claims over-speeding by the pilot vehicle caused the accident.

Mr Iroegbu said he trailed other vehicles and relied on their tail light to keep pace with them when the bus suddenly veered off the road and landed in a ditch.

Dr Abali Chuku, the Medical Director of Federal Medical Centre in Umuahia who confirmed the incident to journalists said the deceased had been deposited at the hospital mortuary.

Chuku explained that of the 10 others affected by the accident, four were in critical condition and were receiving treatment at the intensive care unit.

He called for the establishment of a trauma centre at the hospital to cater for accident cases.

Chuku said that in recent time, the hospital had to contend with serious road accidents, including the one that involved some students and youth corps members.

Meanwhile, Gov. Theodore Orji has visited the survivors at the hospital but did not make any public comment.

He was accompanied on the visit by senior government officials and party officials.