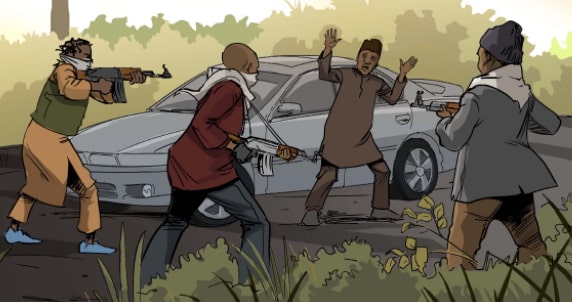 Security agencies in Abia state had a huge success over the arrest of a notorious kidnapper that has been terrorizing Aba and other neighbouring states.

The kidnapper simply identified as Echendu is linked to several kidnapping activities, including being behind the death of a well-known businessman from Ekwulumili, Anambra state.

The Nation gathered that Echendu had gone to Umunka, Ala Ojiegbe; Asa Nnentu with his group to kidnap some school children.

It was learnt that he had succeeded in carrying out the act before the tricycle operator summoned courage and grabbed one of them that eventually became Echendu.

Sources said that the tricycle operator after grabbing him raised alarm which attracted passersby who came to his rescue.

The prompt arrival of soldiers at the venue scared away his group from reprisal and killing of the suspect.

The soldiers were said to have handed him over to the police whose duties is to prosecute the suspect.

Findings have it that Echendu who gave his name to security agents as Jonathan dresses like a woman to beat security checks having being on their wanted list.

“The kidnapping took place at Umunka, Ala Oji, Asa Nnetu area, Echendu and his group were the people who kidnapped and killed a well-known man from Ekwulumili, Anambra state, because he refused to give his ATM pin.

“He was the person that equally kidnapped a woman; Martha Ajuzie Ogu from Asa that has maternity in the area and collected huge ransom from her.

“He was the person behind the kidnapping of one Mrs. Peter Aniekwe. He has been the brain behind all the kidnapping incidents of non-indigenes in Asa North.

“Most times, he disguises himself. He used to wear wig to look like a woman to avoid people from recognizing him. He was the man whose camp was dismantled in 2015 by the military but escaped during the process.

“This time, he went with his group to kidnap children going to school like his mentor; Osisiknakwu did about 2010.

“The tricycle man was very smart to have grabbed one of them who happen to be Echendu and raised alarm. The children had been kidnapped already, but the man summoned courage and held unto Echendu.

“People in the area came to his rescue before the security men came and picked up the guy. He has been the brain behind series of kidnappings in Umunka and adjourning communities. He gave his name as Jonathan at Ngwa High School,” a source disclosed.

When contacted on phone, Abia State Commissioner of Police, CP Eneh Okon confirmed that the suspect was in their custody.

Continue Reading
You may also like...
Related Topics:abia state, arrested, kidnapper, most, wanted