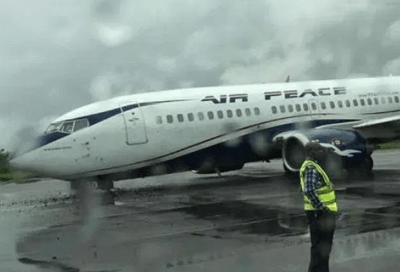 Tragedy was today averted as Air Peace plane crashed while landing at the domestic wing of MMIA airport in Ikeja Lagos today.

The aircraft said to be coming from Port Harcourt reportedly had technical fault and crash landed on the runway.

According to the airline, the Boeing 737 landing gear collapsed after dropping 30ft shortly before landing at the Lagos Airport.

An unconfirmed source said the plane was flown by a female pilot, and crash landed at the Murtala Mohammed Airport, MM2, Lagos state after losing its tyres.

But Henrietta Yakubu, spokesperson of the Federal Airports Authority of Nigeria (FAAN) confirmed the incident, attributing the incident to “faulty landing”, adding that there was no casualty.

“The AIB (Accident Investigation Bureau) officials are there so we are still waiting for the details,” she said.