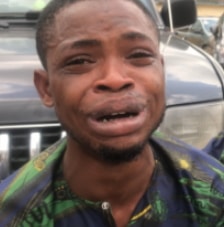 Akinwale Bayo, a 20 year old student was today arraigned in an Ota Magistrates’ Court, Ogun, for allegedly belonging to a secret cult.

The resident of # 8 Tolani St. Ota, is standing trial on a three -count charge bordering on conspiracy, breach of peace and membership of unlawful society, to which he pleaded not guilty.

The prosecutor, Sgt. Abdulkareem Mustapha, had told the court that the accused and others still at large, committed the offences on June 24, at about 2.30 a. m. at Sea Never Dry Hotel, Iju, Ota.

He alleged that the accused and his accomplices, members of “Aiye Confraternity” launched an attack with dangerous weapon like axe on one Olabode Abiola.

The prosecutor also accused the defendant of causing breach of peace.

Chief Magistrate Matthew Akinyemi, granted the defendant bail in the sum of N300,000 with two sureties in like sum and adjourned the matter until Aug. 2 for hearing.

Parents Of 50 Nigerian Students Arrested In Cotonou For Having White People’s Pictures On Their Phones Seek FG Intervention
How The Ghost Of Ex Ondo Deputy Governor Daughter, Khadijat Oluboyo Exposed Her Killer