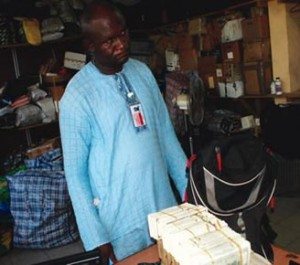 In a country where thousands are going hungry daily, an Official of the Federal Airports Authority of Nigeria, FAAN, Mr Akin Adetula has been arrested as he attempts to smuggle 288 million Naira through MMIA, Lagos International Airport on the evening of October 20, 2012. naijagists.com

On Saturday, Akin Adetula was arrested around 3:45pm while trying to board a flight to the Middle east.

As at the time of this report, Akin Adetula is still being investigated.

How did he get this kind of money?