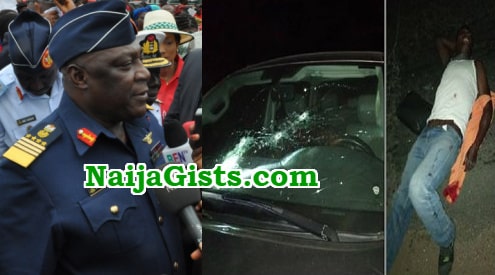 Alex Badeh Poor Driver: Why You Should Never Die Without A Name

How Alex Badeh’s Death Reveals The Unfairness Of Humanity

He would have died without a name. Death visited in the dying hours of Tuesday in the form of men without brains but brawn. They pumped hot lead into ex-Chief of Defence Staff Air Chief Marshal Alex Badeh. They also shot his driver. It was first thought that the two of them died. Before this riddle was resolved, it was as though the driver, whose only sin was driving a big man, did not matter.

Aside the fact that Badeh’s death revealed the unfairness of humanity, it has also shown that many of us have lost the ability to respect the dead. Not a few have said Badeh deserved what he got. Their reason: he squandered the Defence cash while in charge. Then there are those playing politics with the calamity. I saw a tweet by a Peoples Democratic Party (PDP) henchman saying Badeh was one of the harshest critics of the Muhammadu Buhari administration. This was a man who never granted interviews. So, where was he criticising the government, which would now think of silencing him with death? Maybe in his bedroom! This funny chap also claimed Badeh knew so much of the things the Buhari administration is hiding.

This Badeh matter has made me realise that there are times not to die and there are people in whose company it is not good to die. When a poor man dies in the company of a big man, he becomes nothing but a footnote. It is like his death means nothing. Almost everybody will talk about the big man while the poor man’s family will mourn in silence.

It is also not good to die in a tragedy where one of the victims is a big man who those in authority cannot move against. When you die in these circumstances, you become mere footnote.

The way Badeh’s driver became a footnote when he was thought to have died with his boss reminded me of victims of the Uyo church tragedy, whose deaths seem to have gone in vain. This month makes it two years since the tragedy. It all played out at Reigners Bible Church Int’l Inc. The founder of the church was to be ordained a bishop. He is not a small fry so the church was jam-packed. Akwa Ibom State Governor Udom Emmanuel came with some of his commissioners and aides. Some of the commissioners are new in the State Executive Council. They were sworn in on December 1, 2016, few days before the tragedy.

Thirty minutes into the governor’s arrival, hell literally came down. No thanks to human error, the church’s iron pillars gave way and the blue roofs came thumping down. Of course on people! An account even said someone was cut into two by the iron pillars. A policeman who reportedly saved the governor is now six feet below. And some others broke their necks, their limbs and their back. The founder of the church, Pastor Akan Weeks, had his leg broken.

As typical of our nation, no one appears sure of how many people died. The day after the incident, we saw figures as high as 160 in the media. It was attributed to the Chief Medical Director of the University of Uyo Teaching Hospital, who later denied it. Police gave the figure as 29. Governor Emmanuel said only 23 died. And no one is willing to give the names of the dead. Not even two years after. And there is no memorial anywhere with their names inscribed.

This tragedy turned the University of Uyo Teaching Hospital (UUTH), Anua General Hospital, Life Care Hospital and the Ibom Specialist Hospital into Mecca of some sort. In these hospitals, those who defeated death received treatment to heal their broken necks, arms, backs and heads. Tears from families of those recuperating now rented the air in these hospitals for months. The story at the mortuary sections of these hospitals was grimmer.

For students of the University of Uyo, and the Uyo City Polytechnic, believed to have been worst hit by the disaster, reality looked like a dream.

Emmanuel’s men, who crawled out of death’s hole, had interesting testimonies to share. His Chief Press Secretary, Ekerette Udoh, said an iron rod nearly cut his neck, but eventually hit him on the back. The cap of his left knee was broken and pains traveled all over his body.

The Commissioner for Information, Charles Udoh, who joined the State Executive Council only some one week before the disaster, thought he was watching a movie when the pillars started coming down. He was on his way out of the church to catch a flight when tragedy struck. He would have been out but protocol demanded that he told the governor before vanishing from the church hall. It was this protocol-induced task he was accomplishing when death almost took him away. He had to run here and there to prevent the iron pillars from turning him to a candidate for the mortuary.

Nollywood actor Ekere Nkanga, who has acted almost all roles imaginable, was humbled when he had to wade through bodies to safety.”Shortly after the governor and his entourage and the bishops took their seats, the next thing I heard was the bang from the falling iron. By the time the iron came down, I noticed that people from the safe areas were running to the centre, where I was sitting,” he said, adding: “I hid under some people. A few seconds later, as I was trying to get up, the body of a man cut into two and fell on me. There were other corpses on me. I looked out for my brother but I couldn’t find him. Later, I found my phone. I called the Chairman, Uyo Local Government Area, to mobilise rescue officials to the venue.”

He managed not to have a direct impact with falling rods, but by that Saturday evening, he discovered his neck was broken.

Of all those who died in the tragedy, we were lucky to identify Josephine Effiom because of his mates at the polytechnic, who described her as “one of the first three brilliant chaps in my class”. The result of the panel set up by Emmanuel has been less than impressing. Two years after, no one has, in the real sense, been punished for men’s evil on men.

When you pray in the morning, pray never to die in the company of a big man because only your family will mourn in silence. There will be so much noise about the big man everywhere and it will be as though you never matter. Also pray not to die when a big man is to blame. If you do, it will just look like you are without a name.