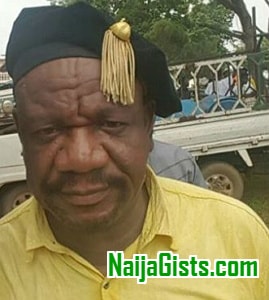 Veteran Nollywood actor and talent manager Alex Usifo in this interview with Lanre Odukoya talks about his thirst for education, his career and Nollywood issues of concern.

Why have you not produced a movie in recent times?

Have you forgotten that I went back to school at some point? I was in school for five years. Doing a PhD programme is not an easy thing. You must have passed through a university before; so, you know what I am saying. Babcock University is not an institution that tolerates absenteeism or laziness. If you are not serious about your education, it will be glaring.

How was the experience studying for a PhD?
I find it disturbing when people say I stressed myself by going back to school for PhD. If you are fond of reading, it can’t be stressful at all. I have always liked education and I read a lot. Once I am not working, I read. What people think or say about you is irrelevant; you should think of why you take such step. If you think about what people would say, you won’t do a thing.
When I wanted to do a diploma degree in mass communication, I was discouraged by many people. They told me journalism would not fetch me money. I was advised to settle for a lucrative course as the media paid poorly. In other words, nothing is good enough for people.

Would you say the postgraduate experience was better than your undergraduate days?

When you are young, your level of concentration may not even be as good as when you are old. When I started my masters, I was already a man capable of producing grandchildren; so I knew what I wanted. I did not need someone to force me to read or tell me what to do. But when I was younger even though I liked education, I didn’t put in 100 per cent attention. There are two different stages.

Why did you wait for many years before obtaining your masters and PhD programme?
To get a good education, you need money. I waited until when I would not be a liability to anyone. I waited until no one would say I was disturbing him or her. I didn’t want to rely on anyone to pay my school fees. When it comes to education, there is no age limit as long as you are not sick. If I can still get my lines correctly at my age, why can’t I go to back to school?

Are there plans to become a lecturer someday?
At every point in time in my life, I impact on people; you do not need a PhD to be a lecturer. The knowledge you get from having a PhD can make you a better human person.

But if I just wanted to do a PhD and put the certificate in my house, it is not anyone’s business. The important thing here is that I went back to school because I wanted to. I have reached a stage in my life where what someone thinks about me is not important. The only thing I may consider important is when I am doing the wrong thing. So, we should be worried about people who do illegal things, not those of us who have gone back to school to empower ourselves.

What are those things that have kept you relevant?

I believe in God and the grace has been sufficient for me. I thank God for all I have achieved so far. If I don’t like what I do, why should I continue doing it? I like what I do and I enjoy doing it. They say winners never quit; I refused to quit and that is why I am still relevant. I also try to improve myself as an actor. If you must speak Yoruba or Igbo language, you must speak it very well. The same thing applies to English language too.

Was there a time you wanted to quit acting?

There was never a time I planned to quit. If you check properly, you will know that my absence was as a result of the need to go back to school. Even before I did my PhD, I needed a break for my masters too. It took me two years to do my masters and five years for my PhD. If you are studying for seven years, your visibility will be reduced.

Why couldn’t you go to school and still act alongside?

The fact that you saw less of me doesn’t mean I didn’t balance it. I was still occasionally going out to shoot. Where did you think I got the money to sponsor myself? I didn’t get a scholarship or loan from anyone. I got my PhD at 63; former President Olusegun Obasanjo got his own at 77. When it is time, people will realise the value of education.

How much fortune have you made from acting?

When people say there is no money in acting, does that mean as a civil servant I would be earning more money? I know about all these things; so, I understand what I am saying. The people enjoying as civil servants are at the top. The same thing applies to journalism too. How much does a reporter take home as a graduate? So, why are people concerned about Nollywood? People are fond of blowing anything that has to do with Nollywood out of proportion as if it has never happened before or it has not been happening. Everything we experience in Nigeria happens to all third world countries. You cannot compare acting in America with that of Nigeria because it is a developed country. Nevertheless, we still have people who are doing well in the industry.

Are your children into acting?

They don’t have to. They also have their own aspirations in life. Acting is something anyone can decide to go into eventually. AY did not know that he would become an actor and he is doing well now.
Even if none of my children goes into acting, I will not feel bad because we all have our own destinies. I am not a father that will force any child into anything. My father didn’t force me to become an actor; so why should I force my own children? If a child shows interest, my role is to guide him or her.

How many children are you blessed with?
I have three boys and a girl. I have adopted children that have their own children now; so, I can call those children my grandchildren too. But none of my children has given birth; my eldest child is 20-year-old while the youngest is nine-year-old.

What kind of father are you at home?
It is left for the children to actually speak for me. But I will say I am a wonderful father because I feed them and I pay their bills. They have a car to themselves too that they use whenever they like; so, what else? I also take them to certain places I feel they may want to visit.

Have you ever thought of retiring from acting?
Actors don’t retire; producers don’t retire as well. It is only when you cannot talk or walk, you are no longer useful. If you are blind, you can still act. I am proud to be an actor. As I speak to you now, don’t you hear me well? I am mentally and physically stable. If these things are in place, why shouldn’t I continue acting?

What other things do you do?
I am a consultant; I specialise in knowledge management. But one thing about me is that I don’t lobby for things I know I can do.

Do you have plans to join politics someday?
There is nothing wrong with joining politics, but everything is wrong with the way we play ours in Nigeria. That is why people like me are not interested in politics; I don’t want to be involved in their dirty game. In other countries, politics is not bad. Without politics, how do you govern the people? How do you choose people who will govern you? But even if we vote in Nigeria, it doesn’t count.

What are those things you wish you could have done better?
I don’t have regrets because I am still doing what I have always loved to do. I enjoy acting and I will never leave it except God says I should stop. If God doesn’t say that, I will continue till I die.

Continue Reading
You may also like...
Related Topics:alex usifo, politics