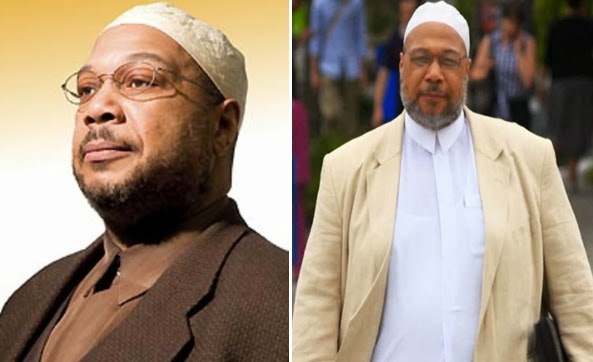 Meet the first openly gay Imam in the history of America, Daayiee Abdullah who was born and raised in a Christian family in Detroit, Michigan.

Daayiee Abdullah’s parents were Southern Baptists. At age 15, he reportedly told his parent he was gay. At age 33 while doing his higher education in China, he converted to Islam. He later travelled to Syria, Jordan and Egypt to learn more about Islam.

But as a gay man in America, he saw that lesbian, gay, bisexual and transgender Muslims had unmet spiritual needs, so he decided to become an imam to attend to their needs.

He’s been condemned by other Muslim leaders, and some local imams have even refused to greet him.

According to Aljazeera, his first act as an imam was performing funeral rites, Muslim body cleaning ritual for a gay Muslim who died of AIDS.

“They had contacted a number of imams, and no one would go and provide him his janazah services. This pained me. I believe every person, no matter if I disagree with you or not, you have the right as a Muslim to have the proper spiritual [rites] and rituals provided for you. And whoever judges you, that will be Allah’s decision, not me.
“The beautiful thing about God is that when you change your attitude, and say, ‘God, I need some help,’ and mean it sincerely, God is always there for you,”

Abdullah serves as the imam and educational director of the Light of Reform Mosque in Washington, D.C. A mosque he helped form more than two years ago, to be a safe space for values and practices that other mosques may eschew.

In his mosque, women and men kneel side-by-side and women are allowed to lead prayers – actions that have sparked controversy even among American Muslims.
His mosque’s congregants are diverse and represent a wide range of cultures, religious upbringings and sexual orientations.

For its LGBT congregants, the Light of Reform Mosque is a rare safe space. But not all of them are gay. Many are just Muslims looking for a mosque that accepts all kinds.

Not everyone is happy with the mosque though.

Some local imams have refused to greet Abdullah, and many others across the country argue his work performing same-sex marriage is not legitimate, and that he should control his “urges.”

But Abdullah is firm in his belief.

“Being an openly gay imam and having been identified as such, I do get a lot of feedback and also kickback, but that’s OK. “I think that when people are unfamiliar with things, they tend to have an emotional knee-jerk reaction to it.