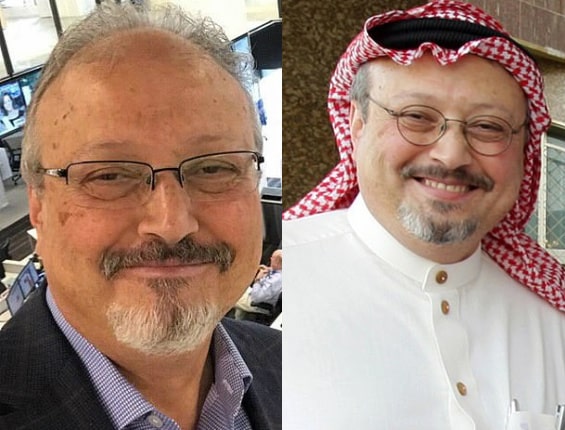 The audio recordings of the horrifying conversations between the 15-man Saudi hit squad and their victim, journalist Jamal Khashoggi, has been revealed to the public for the first time by the Turkish daily Sabah.

The conversations recorded prior to and during the Oct. 2, 2018 murder of the dissident journalist at the kingdom’s Istanbul consulate were obtained by Turkey’s National Intelligence Organization (MIT) right after the gruesome incident, and were shared with related Turkish authorities carrying out an investigation into the incident, as well as with international officials and institutions.

One of the recordings of the conversations between Maher Abdulaziz Mutreb, the number two man of the hit squad, and Dr. Salah Muhammed Al-Tubaigy, the head of Forensic Evidence at the Saudi General Security Department who was in charge of dismembering Khashoggi’s body, are stamped 1:02 p.m., just 12 minutes before Khashoggi arrived at the consulate building to complete marriage procedures.

“I have asthma. Do not do it, you will suffocate me”—Khashoggi’s last words to Saudi killers

Mutreb is seen at the entrance of the Saudi Consulate General located in Istanbul’s Beşiktaş district. 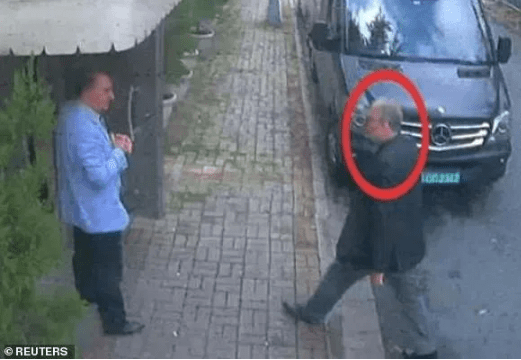 The conversation between the two, who are among the five suspects facing death penalty in Saudi Arabia over the murder, is as follows: 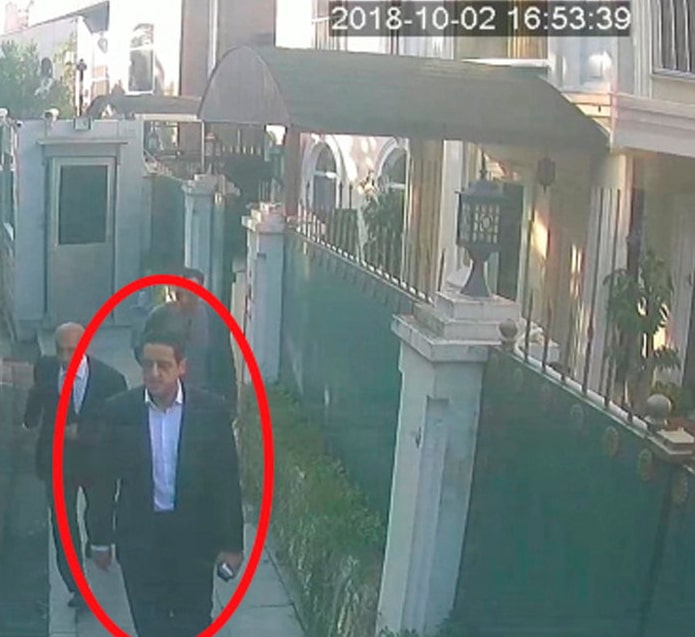 Mutreb: Is it possible to put the body in a bag?

Al-Tubaigy: No. Too heavy, very tall too. Actually, I’ve always worked on cadavers. I know how to cut very well. I have never worked on a warm body though, but I’ll also manage that easily. I normally put on my earphones and listen to music when I cut cadavers. In the meantime, I sip on my coffee and smoke. After I dismember it, you will wrap the parts into plastic bags, put them in suitcases and take them out (of the building).

Al-Tubaigy is also heard saying: “My superior at the Forensic Evidence does not know what I’m doing. There is no one to protect me,” in efforts to ask for protection in the vertical hierarchy going right up to Crown Prince Mohammed bin Salman for the responsibility of dismembering Khashoggi’s body. 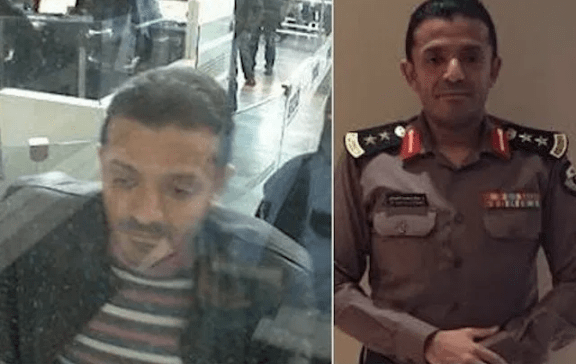 The photo on the left shows al-Tubaigy waiting at a passport control desk in Istanbul’s Atatürk Airport upon arrival.

At the end of the conversation, Mutreb asks whether the “animal to be sacrificed” has arrived. At 1:14 p.m., an unidentified member of the hit squad says “[he] is here.” 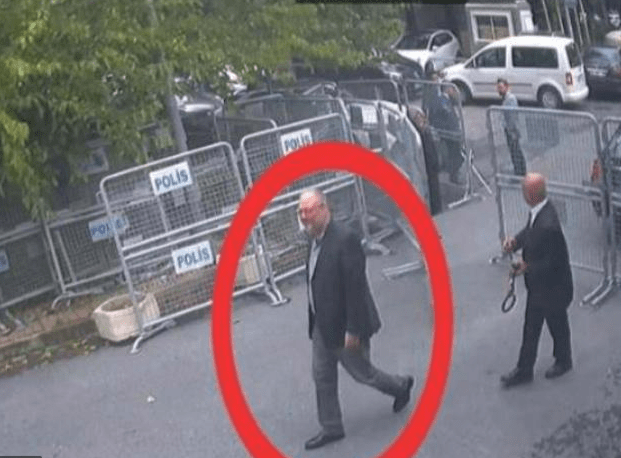 According to the released recordings, Khashoggi is greeted by a familiar face or someone he knows, gauging from his reaction. He is told that the Consul General Mohammad al-Otaibi is also present in the building. First, he is politely invited into the consul’s office on the second floor. When he starts to get suspicious, he is pulled by the arm. He then says;”Let me go, what do you think you’re doing?”.

As soon as Khashoggi enters the room, Mutreb says: “Please sit. We have to take you back [to Riyadh]. There is an order from Interpol. Interpol demanded you be returned. We are here to take you.” To which Khashoggi responds: “There are no lawsuits against me. My fiancée is waiting outside for me.”

During these conversations, another unidentified hit squad member, probably portraying the “bad cop” during the interrogation, repeatedly tells Khashoggi to “cut it short.”

Following these conversations in the last 10 minutes leading up to Khashoggi’s death, the dialogue goes:

Mutreb: Leave a message for your son.

Khashoggi: What should I tell my son?

Mutreb: You will write a message, let’s rehearse; show it to us.

Khashoggi: What should I say, ‘see you soon’?

Mutreb: You will write something like ‘I’m in Istanbul. Don’t worry if you cannot reach me.’

Khashoggi: How can such a thing take place at a consulate? I’m not writing anything.

Khashoggi: I’m not writing anything.

Mutreb: Write it, Mr. Jamal. Hurry up. Help us so we can help you, because in the end we will take you back to Saudi Arabia and if you don’t help us you know what will happen eventually.

Khashoggi: There is a towel here. Will you have me drugged?

Al-Tubaigy: We will put you to sleep.

After he was drugged, Khashoggi says “do not keep my mouth closed” before losing his consciousness.

“I have asthma. Do not do it, you will suffocate me.” These were Khashoggi’s last words.

His killers had already put on a plastic bag on his head, and he would eventually be suffocated to death. Scuffling and struggling then dominate the recordings, with occasional questions and directives from the hit squad heard in between.

Before Khashoggi gives his final breath, scuffling and suffocation sounds continue for a while. Then the postmortem phase begins, which include sounds of dismembering Khashoggi’s body.

At exactly 1:39 p.m., the sound of an autopsy saw is heard. This savage procedure lasts half an hour.

The tapes show he knew about Khashoggi’s brutal murder.

According to the book “Diplomatic Atrocity: The dark secrets of the Khashoggi murder,” penned by Sabah writers Abdurrahman Şimşek, Nazif Karaman and Ferhat Ünlü, Khashoggi’s body was dismembered by al-Tubaigy and taken out of the building in five suitcases. The whereabouts of Khashoggi’s body remains unknown.

Khashoggi was killed and dismembered by a group of Saudi operatives in the country’s consulate in Istanbul on Oct. 2, 2018. Initially denying and later downplaying the incident as an accidental killing in a fistfight, Riyadh finally admitted almost three weeks after the disappearance that Khashoggi was murdered in a premeditated fashion but denied any involvement of the royal family.

The incident was blamed on lower-level officials, including five who are now facing the death penalty over their involvement. A Saudi public prosecutor said in late March that they would seek the death penalty for five suspects among the 21 involved in the case. Ankara has said the statement is not satisfactory and demanded genuine cooperation from Riyadh.

Khashoggi’s body has not been recovered and the kingdom has remained silent on its whereabouts. The U.N. human rights expert who conducted an independent probe into the murder of Khashoggi, Agnes Callamard, said in a report last month that the state of Saudi Arabia was responsible for the murder. The report also found “credible evidence” that linked Saudi Crown Prince Mohammed bin Salman to the killing of Khashoggi. The rapporteur noted she had received no cooperation from Riyadh and minimal help from the U.S.

The recordings, which took place before the murder between Sept. 28 and Oct. 2, 2018, reveal in detail the plans and preparations made between the Saudi Consulate in Istanbul and the Riyadh administration.

On Sept. 28, when Khashoggi came to the Saudi Consulate for papers to marry his fiancee Hatice Cengiz, Ahmed Abdullah al-Muzaini, who worked as Saudi Arabia’s intelligence station chief at the kingdom’s consulate in Istanbul, informed Riyadh with an emergency code that Khashoggi had arrived at the consulate. Khashoggi’s return to the consulate on Oct. 2 was also informed to Riyadh.

On the same day at 7:08 p.m., Saudi Consul Otaibi held a phone call with an official from the office of Saud al-Qahtani, a close aide of Crown Prince Mohammed.

During the conversation, the murder of Khashoggi was called “a private matter” and “a top-secret mission.” The official told the Saudi consul that “the head of state security called me. They have a mission. They want one of your officials from your delegation to deal with a private matter. They want someone from your protocol… for a private, top-secret mission. He can even get permission if necessary.”

These statements are proof that the murder of Khashoggi was not done without the consent of the Saudi crown prince.

At 8 p.m., Muzaini received a phone call from Saudi Consul Otaibi, who told him that “there will be a special training course in Riyadh.”

“I got a call from Riyadh. They asked me to find an officer who previously worked in the protocol. But, this is top secret… there will be training… almost for five days. This is top secret. I want a reliable, nationalist intelligence officer.”

During the rest of the conversation, the two discussed flight alternatives from Istanbul to Riyadh. Muzaini asked if the training would begin the day before or not, to which the Saudi consul replied to him saying, “Yes, they say it will.”

One day before the murder, on Oct. 1, 2018 at 9:48 p.m., a conversation between two unidentified Saudi officials went as follows: “A commission from Saudi Arabia will come tomorrow, there is something they will do at the consulate in my office,” one said.

The other asked if “it” will happen on the first floor to which he got a reply saying, “No, right next to my office. It will last for two to three days, and they have no personnel in charge of the office above.”

“Ok, I will be at the consulate at 8 a.m.,” the other said. “The name of the man who will come to the consulate is Mr. Maha, [a nickname] and they will pass through permission from the head of the commission.”