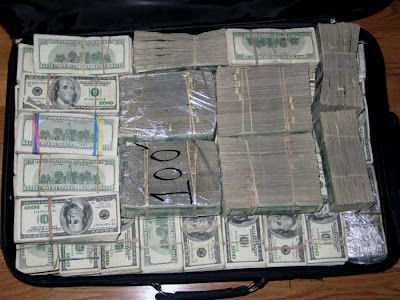 Nigeria has lost another $5.7 in secret arms deal to South Africa following a suspicion of money laundering.

Just when controversy is still raging over the $9.3million cash seized from 2 Nigerians and an Israeli in South Africa on 5 September, the authorities in the country have seized yet another $5.7million meant for an arms purchase between Nigeria and the country.

The seizure even antedated the $9.3million one that triggered questions about the involvement of a jet owned by Pastor Ayo Oritsejafor, president of Christian Association of Nigeria in arms trafficking.

The City Press, quoting its sister paper,Rapport, said the money was seized by The Asset Forfeiture Unit of the National Prosecuting Authority (NPA) though it bore the imprimatur of senior security officials from Nigeria.

According to the report from South Africa, Nigeria’s National Security Adviser, Sambo Dasuki, a lieutenant colonel, personally issued the end-user certificate for the arms the money was meant to buy.

An entire “shopping list” was supplied with the certificate, which included everything from helicopters to unmanned aircraft, rockets and ammunition.

Sources close to the investigation said the latest transaction was between Cerberus Risk Solutions, an arms broker in Cape Town, and Societe D’Equipments Internationaux, a Nigerian company in Abuja.

An impeccable source said this company paid the R60 million into Cerberus’ account at Standard Bank.

Cerberus was previously registered as a broker with the National Conventional Arms Control Committee (NCACC), but the registration expired in May this year.

The marketing and contracting permits also expired at the same time.

The company has since applied for re-registration, but the application lay in the NCACC’s mailbox for more than two months.

Sources told Rapport that Cerberus apparently tried to pay the money back to the Nigerian company, after which the bank became suspicious.

The NPA’s Asset Forfeiture Unit subsequently obtained a court order in the South Gauteng High Court to seize the money.

Cerberus’ attorney, Martin Hood, this week declined to comment on the matter.

NPA spokesperson Nathi Mncube said there were no indications that the two transactions were related.

South Africa has insisted that the money was the proceed of illegal transactions and is now being investigated by the Special Investigating Unit of the department probing offences against the state.
[Sources: City Press, PM News]
Visit NaijaGists For more news updates