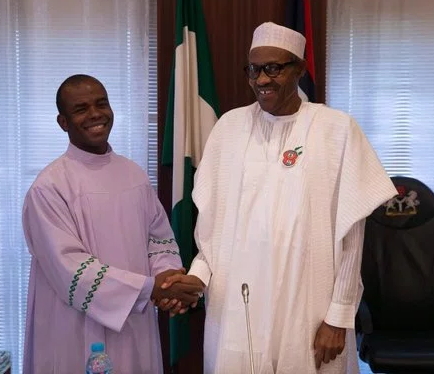 The APC party has ex­pressed reservations over the transfer of Enugu fi­ery Catholic priest, and Director of Adoration Ministry Rev. Fr. Ejike Mbaka, saying there is more to it than matches the routine transfer of priests.

Reacting to Mbaka’s farewell speech where he said he was going to suf­fer as a result of the trans­fer, the party said it was wrong to punish the fear­less priest for his prophe­cies, which has proved to be from God.

“Our people need more liberation clergy, espe­cially ones endowed with healing powers like Mba­ka. The liberation clergy were instrumental in re­turning Latin American countries back to democ­racy in the ’70s and ’80s. They pulled down Pino­chet in Chile and toppled dictators across the globe. We should harvest and culture them instead of hounding them.”

In a statement signed by the APC South-East Cau­cus spokesman, Mr. Osita Okechukwu, the party also added that, “whereas we accept that the transfer of priests is a routine ex­ercise of the great Catho­lic Church; however, we do not wholly accept a situation where the church allows external forces to influence trans­fers as the Mbaka’s case suggests. Otherwise, fu­ture liberation clergy who speak truth to power will be hamstrung to the detri­ment of the society.”

Last month, Mbaka was transferred out of Christ The King Parish in Enugu to a new duty post at Our Lady Parish, Umuchigbo, Njinike, also within the state.

Mbaka said his posting was a witch-hunt, told members of the con­gregation

GEJ Sent Obanikoro To Give Fayose $35Million At Spotless Hotel In Ado Ekiti – PDP Secretary Aluko
In Pictures: Tears In Enugu As Ejike Mbaka Moves To New Parish In Emene