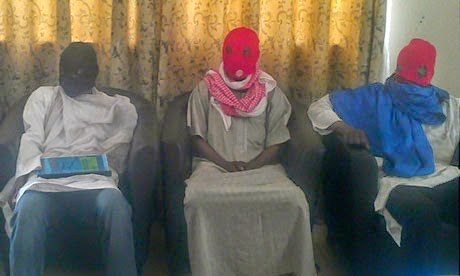 1- Who is feeding over 250 girls kidnapped by Boko Haram?
2- Who did the contract for the supply of over 200 Hijabs that kidnapped girls were wearing?
3- How is Boko Haram feeding its hundreds of fighters?
4- Where is Boko Haram getting the supply of the arms they use to kill people? Who is fueling the over 50 vehicles Boko Haram use in conducting their attacks?
5- Who is providing Boko Haram with internet to upload videos of over 30 minutes on YouTube?
6- How does Boko Haram manage to travel in a convoy of over fifty vehicles and motorcycles in a state that is under “state of emergency” without being noticed?
7- Why does the foreign media know more about Boko Haram than our government and local media?
8- If Boko Haram is a Northern or Muslim agenda to make Nigeria ungovernable for Jonathan, why are they killing Islamic scholars and threatening to kill prominent Northern politicians?
9- If Boko Haram truly want people to join Islam, why are they killing the Muslims?
10- Are Boko Haram really Muslims? Christians? Or a hidden Organisation sponsored by yet-known personnel to distabilise the Unity of Nigerians, divert Nigerians’s attention so they can loot and do whatever they think they can do?