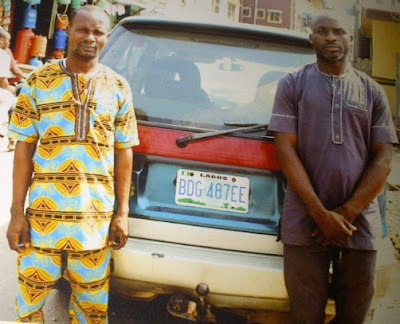 Police alleged that the suspects abandoned the truck and its contents at Olodo area of Ibadan and fled when it broke down while they were driving the truck to their customers to sell off the contents.

Police alleged that the feat was achieved by the Deputy Commissioner of Police,DCP in charge of FSARS Lagos, Ibrahim Kaoje who deployed a team led by DSP Olaniyi Festus to the Lagos-Ibadan expressway following a tip off by some concerned trucks drivers that truck hijackers were robbing them on the highway on a daily basis.

The suspects are: Saidi Mufutau, 40, a truck driver from Ibadan and Nurudeen Odutola, aka FM, 41, who claimed to be an ex-convict from Ilesha prison also from Ibadan.

Police alleged that the fleeing gang leader identified simply as Kayode,aka led the arrested suspects and others now at large to attack the truck driver at Sapadi area on the Lagos-Ibadan expressway on 27 October,2017 while armed with guns and cutlasses after they blocked the truck driver with their car with Reg.No BDG 487 EE.

It was further alleged that while Saidi Mufutau drove the truck enroute to their hideout to sell the contents off before the truck suddenly broke down, Nurudeen Odutola allegedly tied the driver and his assistant with ropes and covered their faces with clothes and dumped them inside the bush.

Nemesis caught up with the suspects when the FSARS operatives swooped on the suspects at their hideout inside the bush at Shagamu interchange area of Ogun State following a tip off and arrested the two suspects while others including their leaders, Kayode aka K managed to escaped with their weapons.

During investigation, according to the Police, the suspects allegedly confessed to the crime
that they normally use their car to patrol the Lagos-Ibadan expressway on a daily basis and that once they come across any truck conveying petrol, they would force it to a stop with their car and hijack the truck from the driver and drive it straight to their customers and sell the petrol inside off at give away price and dump the truck.

A police source said that they have launched a manhunt for the arrest of the fleeing suspects, adding that the suspects would be charge to court after conclusion of the case.