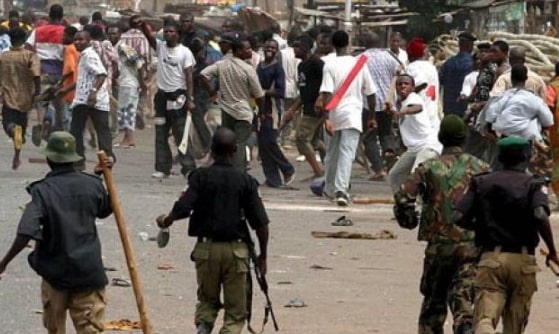 At least 4 people died over the weekend following a bloody clash between two rival cult groups in Ughelli Delta state.

According to eyewitnesses, 2 people were killed at Post Office Junction area of Ughelli on Saturday night when Aiye and Aro Bagger cult members clashed.

The groups reportedly clashed over their support for some candidates of the APC and PDP party in the city.

It was also learnt that while members of the Aro Bagger were alleged to be supporting the APC, those of the Aiye were allegedly sympathetic to the PDP.

Ughelli North LGA is a stronghold of the APC where the senator representing Delta Central at the Senate, Chief Ovie Omo-Agege and the leader of the APC in the state, Olorogun O’tega Emerhor, hail from.

The clash was said to have spilled over to Sunday when members of both cult groups engaged in fierce gun duel around Second Amekpa and Ekredjebor area of the town in separate clashes.

The victim at the Second Amekpa clash was identified as Peter Onochojah. He was reportedly shot in the head by his rival.

A resident of the area, who spoke on condition of anonymity, said,

“The clash took place around 2pm on Sunday; I don’t know which of the cult groups he belongs. He was shot in the forehead by the cult members. He was trailed to his house but as he was running they shot him.

“His corpse was left for about one hour before his parents led some policemen from the Ughelli Area Command to evacuate his lifeless body. He just did the introduction for his wife-to-be two weeks ago. His marriage was being planned immediately after the elections. He recently moved to Amekpa.”

A security source at the Ughelli Area Command, who pleaded not to be mentioned because he was not authorised to speak on the development, confirmed the killings.

The source said the corpses had been deposited at the Ughelli Central Hospital.