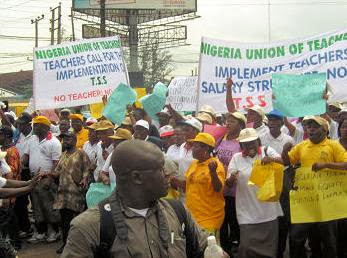 The Nigeria Union of Teachers (NUT) on Thursday gave a two-week ultimatum to the Federal Government and the Academic Staff Union of Universities, ASUU, to resolve the strike embarked upon by university lecturers since 1 July.

The NUT President, Mr Michael Olukoya, gave the ultimatum in Abuja at the end of the union’s meeting with teachers’ representatives across the country.

The News Agency of Nigeria (NAN) reports that ASUU, had on July 1, embarked on a strike it described as “comprehensive, total and indefinite”.

The lecturers are protesting the non-implementation of some issues, contained in an agreement the union had entered into with the Federal Government since 2009.

Olukoya said that members of the union would not hesitate to close down the nation’s schools, if the two parties failed to reach agreement after two weeks.

He described the current ASUU strike “as nationalistic, patriotic and self-sacrificing.

“We will not hesitate to shut down the education system in the country, if the government fails to fulfil or honour the agreement it entered into with the lecturers.”

The NUT president said that Governor Adams Oshiomhole of Edo’s call for a complete over-haul of teachers’ qualification as unacceptable to the NUT.

He said that the blame should be put on the doorsteps of the employers and not teachers.

“NUT will forever be proud of all its teachers, believing that all employment agencies are corruption-free, disciplined and quality conscious in their employment drives.”

Olukoya also urged the governors of Kogi, Benue and Cross River to honour the agreement they made with teachers on the payment of 27.5 per cent teachers salary structure.