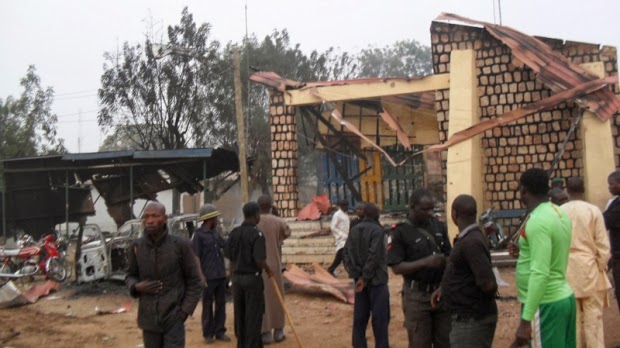 On Thursday the 26th of September 2013, some suspected Boko Haram gunmen attacked a church located in Dorowa, Yobe state.

In the attack, the alleged terrorists killed the pastor and his 2 children after which they burnt down the whole building.

Boko Haram, which has said it is fighting to create an Islamic state in mainly Muslim northern Nigeria, has repeatedly attacked churches in its four-year insurgency.

“Unknown gunmen suspected to be Boko Haram terrorists attacked” the church in Yobe state early on Thursday, during the attack, a pastor and his two children were killed,”area military

The church “and two other houses in the community were burnt by the gunmen before fleeing the scene of the incident,” the statement further said.

The killings occurred in the town of Dorawa, some 30 kilometres (18 miles) from the site of a brutal school attack in July that saw dozens of students slaughtered.
Yobe was one of three northeastern states placed under a state of emergency in mid-May as the military launched a major offensive aimed at crushing Boko Haram.

Yobe has seen less violence than neighbouring Borno state, Boko Haram’s base, but the insurgents have carried out major attacks there.

Attacks on churches, including suicide bombings, were once a near weekly occurence but have declined in recent months.

Since the emergency measures were imposed Boko Haram has largely targeted civilians as well as vigilante groups which have formed to help the military.

The latest violence came after the emergence of a new video, in which a man who resembles Boko Haram’s leader mocked reports of his possible death.

Abubakar Shekau, declared a global terrorist by the United States, taunted the regional military spokesman who said he “may have been” fatally wounded in a clash on June 30.

While Shekau’s whereabouts and condition are unknown, the violence has continued, casting doubt on the success of the four-month-old military offensive.

The Boko Haram conflict was earlier this year estimated to have killed more than 3,600 people, including deaths caused by the security forces. The current toll is likely much higher.